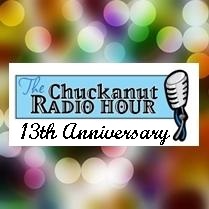 This month, the Chuckanut Radio Hour will celebrate its 13th Anniversary with special guests! Bring your notebooks with you for plenty of recommended reading for the year to come!

Chuck Dingee and Sharon Mayson’s beautiful vocals are what make Free Harmony unique and a treat to listen to. They formed the duo in 2017 and have been busy entertaining people in the Northwest ever since. A founding member of Bellingham’s popular classic rock band The Walrus, Chuck has been singing and playing in the area for over 40 years.  He has an eclectic repertoire of hundreds of songs from Gershwin to Beatles to Pink Floyd.

Having sung all her life, Sharon has an incredibly smooth voice and performs in local Northwest bands High Spirits and Pacific Twang.

Together they play an entertaining mix of songs ranging from the 60s to present, by artists like Simon & Garfunkel, The Beatles, Emmylou Harris, John Denver, Indigo Girls, The Police, Pink Floyd, Eagles, Bonnie Raitt, and many others. In March 2019, Free Harmony was opening act for the band America at the Tulalip and Legends Casinos in Washington state.

This is always a popular show so get your tickets now! Tickets for the Chuckanut Radio Hour are $5 and are available at Village Books and EventBrite.com.