Chuckanut Radio Hour Featuring Christopher McDougall, Running with Sherman: The Donkey with the Heart of a Hero 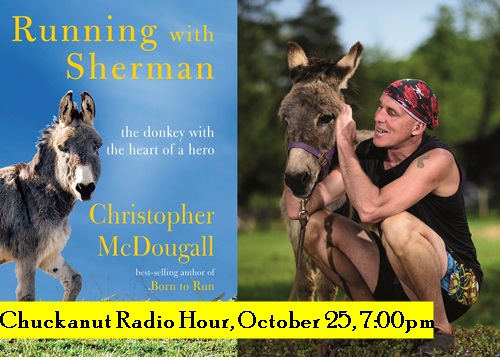 Village Books is so pleased to welcome Christopher McDougall back to the Chuckanut Radio Hour to discuss this heartwarming story about training a rescue donkey to run one of the most challenging races in America.

Before he takes the stage at the Chuckanut Radio Hour, Christopher McDougall and our friends at Animals as Natural Therapy are going to make a special appearance at Village Books for a special kid-friendly event! Christopher will be on hand manning his tattoo parlor as he affixes temporary tattoos of Sherman the beloved donkey featured in his new book, Running with Sherman. He’ll sign copies of his books, put tattoos on anyone willing, and folks from Animals as Natural Therapy will bring along a menagerie of creatures for you to interact with, including their miniature horses! Therapy animals will include three miniature horses, and additional farm animals as available (goats, rabbits, chickens, and dog). The miniature horses will be handled by trained staff and volunteers. Visitors of all ages are welcome to meet, pet, and spend time with the animals. You don’t want to miss this special addition to an already spectacular evening of fun with the author of Born to Run and Natural Born Heroes.

After this event, grab some dinner and then head to WCC’s Heiner Theater to catch Christopher on The Chuckanut Radio Hour.

When Chris McDougall agreed to take in a donkey from an animal hoarder, he thought it would be no harder than the rest of the adjustments he and his family had made after moving from Philadelphia to the heart of Pennsylvania Amish country. But when he arrived, Sherman was in such bad shape he could barely move, and his hair was coming out in clumps. Chris decided to undertake a radical rehabilitation program designed not only to heal Sherman’s body but to heal his mind as well. It turns out the best way to soothe a donkey is to give it a job, and so Chris decided to teach Sherman how to run. He’d heard about burro racing–a unique type of race where humans and donkeys run together in a call-back to mining days–and decided he and Sherman would enter the World Championship in Colorado.

Easier said than done. In the course of Sherman’s training, Chris would have to recruit several other runners, both human and equine, and call upon the wisdom of burro racers, goat farmers, Amish running club members, and a group of irrepressible female long-haul truckers. Along the way, he shows us the life-changing power of animals, nature, and community.

Christopher McDougall covered wars in Rwanda and Angola as a foreign correspondent for the Associated Press before writing his best-selling book Born to Run. His fascination with the limits of human potential led him to create the Outside magazine web series, “Art of the Hero.” He currently lives with his wife, two daughters, and a farmyard menagerie in Lancaster County, Pennsylvania.

Christopher McDougall will be interviewed by Sonja Wingard, Executive Director of Animals as Natural Therapy. Doors open and music begins at 6:30pm!

The Chuckanut Radio Hour, a recipient of Bellingham's prestigious Mayor's Arts Award, is a radio variety show that began in January 2007. Each Chuckanut Radio Hour includes guest authors, musicians, performance poet Kevin Murphy, and episodes of "As the Ham Turns" serial radio comedy, not to mention groaner jokes by hosts Paul Hanson, Kelly Evert, and announcer Rich Donnelly. The Chuckanut Radio Hour's first guest was Erik Larson and has since included Alexander McCall Smith, Cheryl Strayed, Tom Robbins and Garrison Keillor, among many others. Tickets for the Chuckanut Radio Hour are $5 and are available at Village Books and Eventbrite. Receive a free ticket with purchase of Running with Sherman. The Chuckanut Radio Hour airs every Sunday at 10am on KMRE 102.3FM. Co-sponsored by the Whatcom Community College Community and Continuing Education, 12th Street Shoes, Fairhaven Runners & Walkers, Animals as Natural Therapy, and Westside Pizza.

Running with Sherman: The Donkey with the Heart of a Hero (Hardcover)

Born to Run: A Hidden Tribe, Superathletes, and the Greatest Race the World Has Never Seen (Paperback)