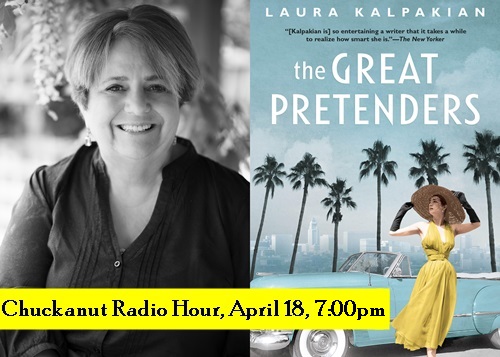 Hollywood, 1953: From the beach at Malibu to leafy Laurel Canyon, from the sound-stages of Empire Pictures to jazz clubs on Central Avenue, Roxanne Granville bravely defies the era she was born to. Enmeshed in a swirling cauldron of blacklist politics, deceit and forbidden love, her many secrets make her vulnerable to ruin. A novel about aspiration and desperation and un-regretted folly.

Laura Kalpakian is the author of sixteen novels and four collections of short fiction published in the US and the UK. Recipient of a National Endowment for the Arts Fellowship in Fiction, and nominated for the 2007 International IMPAC Dublin Literary Award, her work has garnered acclaim on both sides of the Atlantic. A native Californian, Laura is a longtime resident of the Pacific Northwest where she was Theodore Roethke Writer in Residence at the University of Washington and taught memoir and fiction there. She also served on the Board of Humanities Washington. She is a co-founder of the Red Wheelbarrow Writers.

The Chuckanut Radio Hour, a recipient of Bellingham's prestigious Mayor's Arts Award, is a radio variety show that began in January 2007. Each Chuckanut Radio Hour includes guest authors, musicians, performance poet Kevin Murphy, and episodes of "As the Ham Turns" serial radio comedy, not to mention groaner jokes by hosts Paul Hanson, Kelly Evert, and announcer Rich Donnelly. The Chuckanut Radio Hour's first guest was Erik Larson and has since included Alexander McCall Smith, Elizabeth George, Cheryl Strayed, Tom Robbins and Garrison Keillor, among many others. Tickets for the Chuckanut Radio Hour are $5 and are available at Village Books and BrownPaperTickets.com. Receive a free ticket with purchase of The Great Pretenders. The Radio Hour airs every Thursday at 9pm, Saturday mornings at 7am and Saturday evenings at 5pm on SPARK RADIO, KMRE 102.3FM.  Co-sponsored by the Whatcom Community College Community and Continuing Education, 12th Street Shoes, and Westside Pizza.