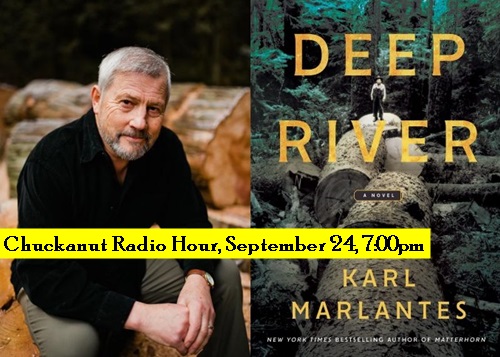 Karl Marlantes made his name with the critically acclaimed New York Times bestseller, the “powerful and moving” (James Fallows, Atlantic) Matterhorn: A Novel of the Vietnam War. Now with his new novel, Deep River, Marlantes applies the epic narrative sweep of Matterhorn to a family saga about Finnish immigrants to the Pacific Northwest. Marlantes draws glancing inspiration from his own family history to tell a story against the backdrop of a logging industry clashing with the radical burgeoning labor movement, World War I, and the upheavals of early twentieth century America. Layered with fascinating historical detail, and vivid evocations of the pristine beauty of the primeval forest, Deep River is an ambitious and timely exploration of the place of the individual, and of the immigrant, in an America still in the process of defining its own identity.

Karl Marlantes is the author two New York Times bestsellers: Matterhorn: A Novel of the Vietnam War and his nonfiction book What It Is Like to Go to War. He is married and has five adult children and three grandchildren. He grew-up in a small logging town on the Oregon coast and fished commercially with his grandfather as a teenager.

Our featured musical guest is Saloon!

Saloon is the Americana duo of Ted O’Connell (mandolin and guitar) and Lyndsay Poynter (guitar) and any other musical friends who happen to wander into the drawing room with troubles on their mind. As the name suggests, Saloon is all about creating an intimate communal space for musicians, drunkards, and saints—where songwriting is taken seriously but not too seriously.

The Chuckanut Radio Hour, a recipient of Bellingham's prestigious Mayor's Arts Award, is a radio variety show that began in January 2007. Each Chuckanut Radio Hour includes guest authors, musicians, performance poet Kevin Murphy, and episodes of "As the Ham Turns" serial radio comedy, not to mention groaner jokes by hosts Paul Hanson, Kelly Evert, and announcer Rich Donnelly. The Chuckanut Radio Hour's first guest was Erik Larson and has since included Alexander McCall Smith, Elizabeth George, Cheryl Strayed, Tom Robbins and Garrison Keillor, among many others. Tickets for the Chuckanut Radio Hour are $5 and are available at Village Books and EventBrite.com. Receive a free ticket with purchase of Deep River. The Radio Hour airs every Thursday at 9pm, Saturday mornings at 7am and Saturday evenings at 5pm on KMRE 102.3FM.  Co-sponsored by the Whatcom Community College Community and Continuing Education, 12th Street Shoes, and Westside Pizza.

Matterhorn: A Novel of the Vietnam War (Paperback)

What It Is Like to Go to War (Paperback)