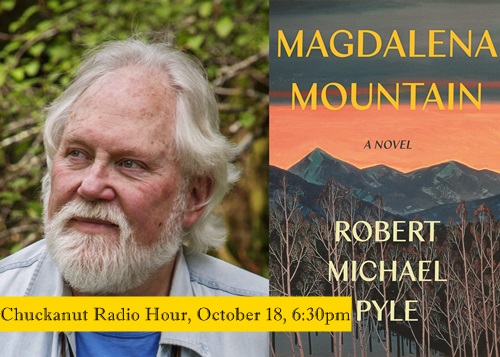 Village Books is pleased to welcome Robert Michael Pyle to the Chuckanut Radio Hour for the first time!

In Magdalena Mountain, his first and long-awaited novel, the award-winning naturalist proves he is as at home in an imagined landscape as he is in the natural one. At the center of this story of majesty and high mountain magic are three Magdalenas—Mary, a woman whose uncertain journey opens the book; Magdalena Mountain, shrouded in mystery and menace; and the all-black Magdalena alpine butterfly, the most elusive of several rare and beautiful species found on the mountain.

Robert Michael Pyle grew up and learned his butterflies in Colorado, where he fell in love with the Magdalena Alpine and its high-country habitat. He took his Ph.D. in butterfly ecology at Yale University, worked as a conservation biologist in Papua New Guinea, Oregon, and Cambridge, and has written full-time for many years. His twenty-two books include Wintergreen (John Burroughs Medal), Where Bigfoot Walks (Guggenheim Fellowship), and Sky Time in Gray’s River (National Outdoor Book Award). He lives in rural southwest Washington State and still studies butterflies.

The Chuckanut Radio Hour, a recipient of Bellingham's prestigious Mayor's Arts Award, is a radio variety show that began in January 2007. Each Chuckanut Radio Hour includes guest authors, musicians, performance poet Kevin Murphy, and episodes of "As the Ham Turns" serial radio comedy, not to mention groaner jokes by hosts Paul Hanson, Kelly Evert, and announcer Rich Donnelly. The Chuckanut Radio Hour's first guest was Erik Larson and has since included Alexander McCall Smith, Elizabeth George, Cheryl Strayed, Tom Robbins and Garrison Keillor, among many others. Tickets for the Chuckanut Radio Hour are $5 and are available at Village Books and BrownPaperTickets.com. Receive a free ticket with purchase of Magdalena Mountain. The Radio Hour airs every Friday at 7am, Saturday evening at 7pm and Sunday at9pm on SPARK RADIO, KMRE 102.3FM.  Co-sponsored by the Whatcom Community College Community and Continuing Education, 12th Street Shoes, and Westside Pizza.

*Part of the Nature of Writing series, Co-sponsored by North Cascades Institiute

Through a Green Lens: Fifty Years of Writing for Nature (Paperback)