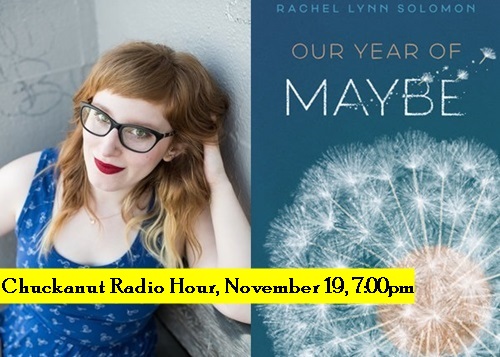 From the author of You'll Miss Me When I'm Gone comes a stunning contemporary novel that examines the complicated aftermath of a kidney transplant between best friends. Aspiring choreographer Sophie Orenstein would do anything for Peter Rosenthal-Porter, who’s been on the kidney transplant list as long as she’s known him. Peter, a gifted pianist, is everything to Sophie: best friend, musical collaborator, secret crush. When she learns she’s a match, donating a kidney is an easy, obvious choice. She can’t help wondering if after the transplant, he’ll love her back the way she’s always wanted.

Peter fears he’ll forever be indebted to her. Sophie isn’t sure who she is without him. Then one heartbreaking night twists their relationship into something neither of them recognizes, leading them to question their past, their future, and whether their friendship is even worth fighting for.

Rachel Lynn Solomon writes, tap dances, and collects red lipstick in Seattle, Washington. Once she helped set a Guinness World Record for the most natural redheads in one place. She's the author of the Sydney Taylor Honor Award-winning You'll Miss Me When I'm Gone, also an Indies Introduce title and Kids' Indie Next Top 10 Pick, and Our Year of Maybe, a Kids' Indie Next Pick, both from Simon & Schuster/Simon Pulse.

Tickets for the Chuckanut Radio Hour are $5 and are available at Village Books and on Eventbrite. Receive a free ticket with purchase of Our Year of Maybe.

The Chuckanut Radio Hour, a recipient of Bellingham's prestigious Mayor's Arts Award, is a radio variety show that began in January 2007. Each Chuckanut Radio Hour includes guest authors, musicians, performance poet Kevin Murphy, and episodes of "As the Ham Turns" serial radio comedy, not to mention groaner jokes by hosts Paul Hanson, Kelly Evert, and announcer Rich Donnelly. The Chuckanut Radio Hour's first guest was Erik Larson and has since included Alexander McCall Smith, Cheryl Strayed, Tom Robbins and Garrison Keillor, among many others. The Radio Hour airs every Sunday at 10am on KMRE 102.3FM. Co-sponsored by the Whatcom Community College Community and Continuing Education, 12th Street Shoes, and Westside Pizza.

Our Year of Maybe (Hardcover)