Chuckanut Radio Hour Featuring Stevan Allred, The Alehouse at the End of the World - Fiction! 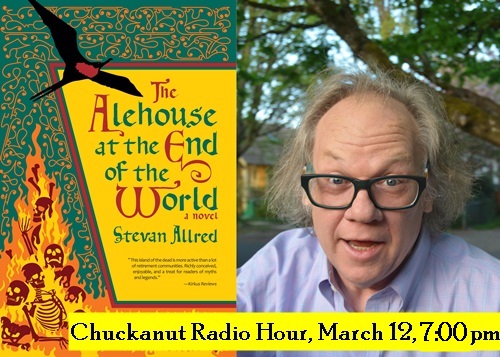 When a fisherman receives a mysterious letter about his beloved’s demise, he sets off in his skiff to  find her. A whale swallows him, then deposits him on the Isle of the Dead, which is ruled by a trio of giant bird gods.  The fisherman must negotiate with the self-proclaimed leader—a narcissistic, bullying crow—to return his beloved to physical form. In The Alehouse at the End of the World, an epic comedy set in the sixteenth century, bawdy Shakespearian love triangles play out with shape-shifting avian demigods and a fertility goddess, drunken revelry, and bio-dynamic gardening. A raucous, aw-aw-aw-awe-inspiring romp, Stevan Allred’s second book is a juicy fable for adults and a hopeful tale for our troubled times.

Stevan Allred, author of The Alehouse at the End of the World, lives in Portland, Oregon, halfway between Hav and the Isle of the Dead, which is to say he spends as much time burrowed into his imagination as he possibly can.
Our musical guest will be Sarah Goodin!
Doors open and music begins at 6:30pm.
Radio Hour, a recipient of Bellingham's prestigious Mayor's Arts Award, is a radio variety show that began in January 2007. Each Chuckanut Radio Hour includes guest authors, musicians, performance poet Kevin Murphy, and episodes of "As the Ham Turns" serial radio comedy, not to mention groaner jokes by hosts Paul Hanson and Kelly Evert and announcer Rich Donnelly. The Chuckanut Radio Hour's first guest was Erik Larson and has since included Alexander McCall Smith, Elizabeth George, Cheryl Strayed, Sherman Alexie, Tom Robbins and Garrison Keillor, among many others. Tickets for the Chuckanut Radio Hour are $5 will soon be available at Village Books and BrownPaperTickets.com. Each paid ticket includes a $5 voucher good toward the purchase of The Alehouse at the End of the World. The Radio Hour airs every Friday at 7am, Saturday evening at 7pm and Sunday at 9pm on SPARK RADIO, KMRE 102.3FM.  Co-sponsored by the Whatcom Community College Community and Continuing Education, 12th Street Shoes, and Westside Pizza.
Books:

The Alehouse at the End of the World (Paperback)