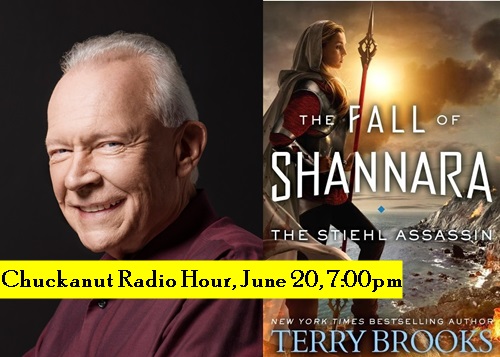 We're so happy to bring Terry Brooks back to Bellingham for our kick-off event to the Chuckanut Writers Conference.

The Skaar have arrived in the Four Lands, determined to stop at nothing less than all-out conquest. They badly need a new home, but peaceful coexistence is not a concept they have ever understood. An advance force under the command of the mercurial princess Ajin has already established a foothold, but now the full Skaar army is on the march—and woe betide any who stand in its way.

But perhaps the Skaar victory is not quite the foregone conclusion everyone assumes. The Druid Drisker Arc has freed both himself and Paranor from their involuntary exile. Drisker’s student, Tarsha Kaynin, has been reunited with Dar, chief defender of what is left of the Druid order, and is learning to control her powerful wishsong magic. If they can only survive Tarsha’s brother, Tavo, and the Druid who betrayed Drisker Arc, they might stand a chance of defeating the Skaar. But that is a very big if . . . as Tavo now carries the Stiehl—one of the most powerful weapons in all the Four Lands—and is hellbent on taking his revenge on everyone he feels has wronged him.

Terry Brooks has thrilled readers for decades with his powers of imagination and storytelling. He is the author of more than 30 books, most of which have been New York Times bestsellers. He lives with his wife, Judine, in the Pacific Northwest.

Terry Brooks will be interviewed by local author Spencer Ellsworth and our musical guest will be Louis Ledford.

The Chuckanut Radio Hour, a recipient of Bellingham's prestigious Mayor's Arts Award, is a radio variety show that began in January 2007. Each Chuckanut Radio Hour includes guest authors, musicians, performance poet Kevin Murphy, and episodes of "As the Ham Turns" serial radio comedy, not to mention groaner jokes by hosts Paul Hanson, Kelly Evert, and announcer Rich Donnelly. The Chuckanut Radio Hour's first guest was Erik Larson and has since included Alexander McCall Smith, Elizabeth George, Cheryl Strayed, Tom Robbins and Garrison Keillor, among many others. Tickets for the Chuckanut Radio Hour are $5 and are available at Village Books and EventBrite.com. Receive a free ticket with purchase of The Rise of Shannara. The Radio Hour airs every Thursday at 9pm, Saturday mornings at 7am and Saturday evenings at 5pm on KMRE 102.3FM.  Co-sponsored by the Whatcom Community College Community and Continuing Education, 12th Street Shoes, and Westside Pizza.

The Stiehl Assassin (The Fall of Shannara #3) (Hardcover)

The Skaar Invasion (The Fall of Shannara #2) (Mass Market)

The Black Elfstone: The Fall of Shannara (Mass Market)

The Sword of Shannara (Mass Market)

Running with the Demon (Pre-Shannara: Word and Void #1) (Mass Market)

The Sorcerer's Daughter: The Defenders of Shannara (Mass Market)

A Knight of the Word (Pre-Shannara: Word and Void #2) (Mass Market)