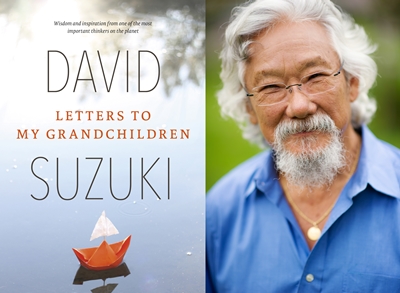 In Letters to My Grandchildren, revered environmentalist David Suzuki draws on his experiences and wisdom gained over his life to pass on to future generations. Through inspiring letters to his grandchildren, Suzuki offers grandfatherly advice mixed with reflections from his and Canada’s past, speaking personally and passionately about their future. The book provides us with an intimate look at Suzuki’s life as a father and grandfather as he challenges his grandchildren – and us – to do everything at full tilt and to live with courage and conviction.

David Suzuki is a scientist, broadcaster, author, and co-founder of the David Suzuki Foundation. He’s hosted the award-winning CBC program The Nature of Things for over thirty years. He has written more than 40 books, including books for children, all with the aim of examining and learning how science, technology, and nature affect our lives. He is the recipient of the Right Livelihood Award, has been named a Companion to the Order of Canada and a recipient of UNESCO’s Kalinga Prize for science, was awarded the United Nations Environment Program medal, and has been honored with seven names from indigenous people. In 2007 he was named one of Time Magazine’s Heroes of the Environment. He is the proud grandfather of six grandkids.

Village Books is proud to present David Suzuki in partnership with the Mount Baker Theatre, as part of our Booked at The Baker Series.

Tickets are $7.50, and are available at Village Books, by calling (360) 671-2626, or at the Mount Baker Theatre Box Office.
Want to go for free? Receive one free ticket with the pre-purchase of Letters to My Grandchildren.

Letters to My Grandchildren (Hardcover)