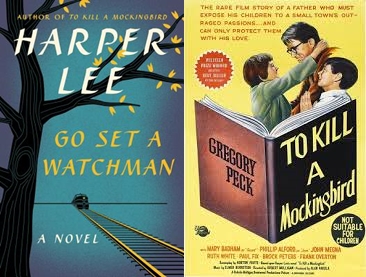 In 1960 Harper Lee published To Kill a Mockingbird. On July 14, nearly fifty-five years to the day after the publication of that American classic, Ms. Lee's second novel, Go Set a Watchman, is released.

To celebrate this momentous literary event, Village Books is hosting a FREE screening of the iconic film version of To Kill a Mockingbird on the Fairhaven Village Green, on Monday night, July 13, just after 9:30pm. The two-hour-and-ten-minute film, featuring Gregory Peck as Atticus Finch, will end just before midnight, when Go Set a Watchman will go on sale for the first time.

The new novel, though written before To Kill a Mockingbird, is a sequel, in which an adult Scout returns to her hometown of Maycomb, Alabama, to visit her father, Atticus. She grapples with personal and political issues, her father's attitude toward society, and her own feelings about the place she was born and spent her childhood.

Please join us for this once in a lifetime event! Pre-ordering of Go Set a Watchman is now available in store, online, or by calling 360.671.2626.