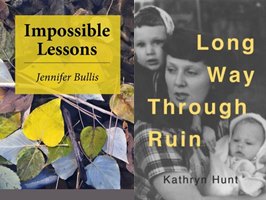 Jennifer Bullis has pointed questions for The Deity. In Impossible Lessons, she is both inspired and puzzled by provisional answers. Borrowing images from her horse farm and hiking, philosophy and mythology, these poems engage “leaf and stem and longing,” explore “seasons of loss,” and trace the “long kindnesses” of family.

Jennifer Bullis, originally from Reno, earned a Ph.D. from UC Davis and taught English at Whatcom Community College for 14 years. Currently, she writes, hikes, and tries to keep up with her eight-year-old son. Her poems appear in such literary journals as Conversations Across Borders, Clover, Natural Bridge, Floating Bridge Review, and Iron Horse. Impossible Lessons is her first collection of poems.

Kathryn Hunt’s book, Long Way through Ruin, charts a woman’s pilgrimage from the forests of the Pacific, to the parched hills of Wyoming. Ruins unearthed, broken pieces gathered—this is the poet’s land, where fire and time have burnt life down to the essentials, and the only thing left pointing true North is the “smoldering muscle of the heart.”

Kathryn Hunt lives in Port Townsend, Washington, on the coast of the Salish Sea. Her collection of poems, Long Way through Ruin, is just out from Blue Begonia Press. Dorianne Laux selected a poem from the collection for the Argos Prize. Her poems and essays have appeared in Rattle, The Sun, Willow Springs, Orion, Crab Orchard Review, CutBank, and Portland (forthcoming), among other magazines. She is also the director documentary films. Take This Heart, a feature-length documentary about children in foster care, was broadcast on PBS and honored with the Anna Quindlen Award for Excellence in Journalism. No Place Like Home was screened at the Venice Film Festival, among others. She is at work on a memoir, the story of a mother and a daughter and the tangled, maddening, and abiding claims of family.
Books: