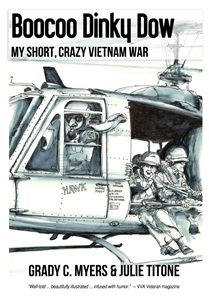 Grady Myers was an artistic but aimless teenager in 1968, when, desperate for troops, the U.S. Army overlooked his extreme nearsightedness and transformed him into Hoss, an M-60 machine gunner. His illustrated memoir "Boocoo Dinky Dow: My short, crazy Vietnam War" is by turns funny and sobering. Grady recounts his military initiation at Fort Lewis, where there could be a fuzzy line between training and torture. He describes the intensity of Vietnam, where an old man carrying a bundle of sticks posed a moral dilemma and a young man would weigh the burden of his virginity against the dubious pleasures of riverbank prostitutes. Grady's explosives-happy comrades in Charlie Company sometimes posed the greatest danger. But, in a dramatic ambush, that same bunch of crazy soldiers risked their lives to save his.

Co-author Julie Titone is a Washington writer and photographer whose work has appeared in regional, national and international publications. She has made a personal journey of sharing “Boocoo Dinky Dow” with audiences and honoring veterans since Grady Myers, her ex-husband, died in 2011.