Kari Neumeyer, Bark and Lunge: Saving My Dog from Training Mistakes--Co-Sponsored by Tails-A-Wagging 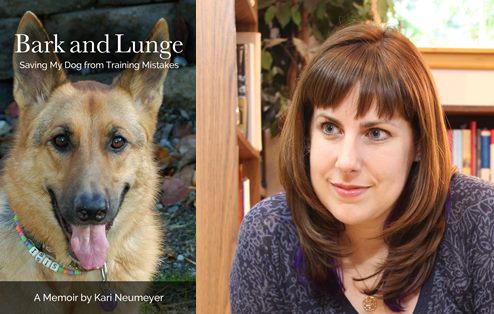 How do you make sure the dog you love never bites anyone (again)? Kari and Rob are as devoted to their German shepherd puppy, Isis, as two dog parents can be. Kari’s the disciplinarian, struggling to follow every instruction to the letter. Rob’s the laid-back dad, more of a littermate, happy as long as he can practice jiu-jitsu with the dog. As she grows, Isis’s behavior escalates from frustrating to dangerous when she bites someone. Kari and Rob learn that some of the old-fashioned advice they followed may have contributed to Isis’s aggression. Eventually, they’re shown a better way to calm an anxious and fearful dog.

Kari Neumeyer has a master's degree in journalism from Northwestern University's Medill School and has worked for news outlets in Washington State and the Czech Republic. She grew up in Los Angeles and graduated from the University of Southern California's School of Cinema-Television. Now she lives in Bellingham, with her beau, Rob, and their dog family. In her spare time, she volunteers teaching an adaptive martial arts class to adults with developmental disabilities at the Max Higbee Center, fostering a love of creative writing to Whatcom dogs at the Humane Society of Skagit Valley.
This event is co-sponsored by Tails-A-Wagging, a local training and daycare resource dedicated to providing dogs in our community with fun, exercise, socialization, education and stimulation.

Bark and Lunge: Saving My Dog from Training Mistakes (Paperback)