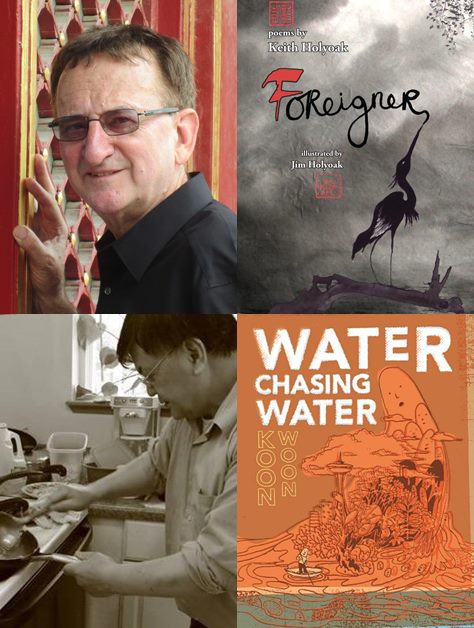 "In poems that seems as natural, timeless, yet inevitable as a moonrise over the mountains, Koon Woon's steady voice delivers again and again. Here is a poet with a mature vision and the considerable skills necessary to make it all look easy, each poem a small piece of the fabric woven from his life," writes poet Sam Hamill about Woon's latest book, Water Chasing Water. Woon's book was just awarded a 2014 American Book Award. The American Book Awards were created to provide recognition for outstanding literary achievement from the entire spectrum of America's diverse literary community.
Koon Woon was born in China in 1949 and arrived in the US in 1960. His first book The Truth in Rented Rooms from Kaya Press won the Josephine Miles Award from Pen Oakland for literary excellence and was a finalist in the Norma Farber First Book Award from the Poetry Society of America.
In his new volume Foreigner, Keith Holyoak creates contemporary poetry in the style of ancient Chinese classics. His marriage of eastern and western influences is derived from his earlier work translating the great poets of the Tang dynasty, Li Bai and Du Fu. A few translations are interspersed among Holyoak’s original poems. The east-west fusion is further highlighted by the illustrations, created by Jim Holyoak (Keith’s son) using traditional Chinese-ink painting techniques.
Keith Holyoak, poet, translator of classical Chinese poetry, and cognitive scientist, was raised on a dairy farm in British Columbia, Canada. Currently a Distinguished Professor of Psychology at the University of California, Los Angeles, he has been a recipient of a Guggenheim Fellowship, and is a Fellow of the American Association for the Advancement of Science (see www.keithholyoak.com). A collection of Holyoak's translations, Facing the Moon: Poems of Li Bai and Du Fu appeared in 2007. He has also published a collection of his own poems, My Minotaur. His spoken-word CDs are available from Broken Electric Records (www.BrokenElectric.com).
Books: