CANCELLED: Evolve Reads...Life Between the Pages 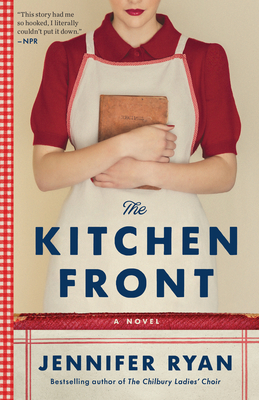 Evolve's ever-popular book group dinners are back! Indulge your palate and your mind with a sensorial Five-course Dinner Book Club at Evolve Chocolate + Cafe located on the mezzanine level of Village Books. This Book Club includes food and cocktail pairings, and introduces a new bartender each month from a local bar or restaurant! Dinners are on the second Thursday of every month at 6pm. Seating is limited and these dinners do sell out so make your reservation today for this book club that hits ALL the senses. Tickets are $75 and can be purchased in person at Evolve or by following the link below. Order a copy of the featured title from Village Books and receive 15% off!

THIS EVENT HAS BEEN CANCELLED

The Kitchen Front by Jennifer Ryan

From the bestselling author of The Chilbury Ladies’ Choir comes an unforgettable novel of a BBC-sponsored wartime cooking competition and the four women who enter for a chance to better their lives.

NAMED ONE OF THE BEST BOOKS OF THE YEAR BY GOOD HOUSEKEEPING • “This story had me so hooked, I literally couldn’t put it down.”—NPR

Two years into World War II, Britain is feeling her losses: The Nazis have won battles, the Blitz has destroyed cities, and U-boats have cut off the supply of food. In an effort to help housewives with food rationing, a BBC radio program called The Kitchen Front is holding a cooking contest—and the grand prize is a job as the program’s first-ever female co-host. For four very different women, winning the competition would present a crucial chance to change their lives.

These four women are giving the competition their all—even if that sometimes means bending the rules. But with so much at stake, will the contest that aims to bring the community together only serve to break it apart?

Jennifer Ryan, the author of The Chilbury Ladies’ Choir and The Spies of Shilling Lane, lives in the Washington, D.C., area with her husband and two children. Originally from Kent and then London, she was previously a nonfiction book editor.

The Kitchen Front: A Novel (Paperback)