Evolve Reads...Life Between the Pages 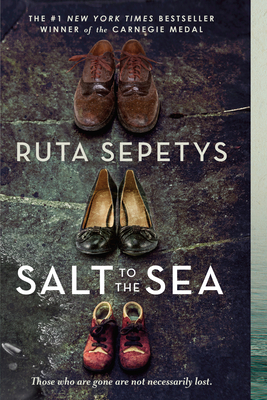 Indulge your palate and your mind with a sensorial Five-course, Dinner Book Club at Evolve Chocolate + Cafe every fourth Thursday at 6:00-8:30pm! This Book Club is moderated by Nancy Johnson and includes food by Chef Christy Fox with cocktail pairings--introducing a new bartender each month from a local bar or restaurant! Seating is limited so make your reservation today for this book club that hits ALL the senses. Tickets are $60 and can be purchased at the Cafe and Eventbrite. Books can be purchased with a 15% discount at Village Books!

Salt to the Sea by Ruta Sepetys

#1 New York Times bestseller and winner of the Carnegie Medal!

Based on "the forgotten tragedy that was six times deadlier than the Titanic."--Time

Each one born of a different homeland; each one hunted, and haunted, by tragedy, lies, war. As thousands desperately flock to the coast in the midst of a Soviet advance, four paths converge, vying for passage aboard the Wilhelm Gustloff, a ship that promises safety and freedom. But not all promises can be kept . . .

Ruta Sepetys (www.rutasepetys.com) is an internationally acclaimed, #1 New York Times bestselling author of historical fiction published in over sixty countries and forty languages. Sepetys is considered a "crossover" novelist, as her books are read by both teens and adults worldwide. Her novels Between Shades of Gray, Out of the Easy, and Salt to the Sea have won or been shortlisted for more than forty book prizes, and are included on more than sixty state award lists. Between Shades of Gray was adapted into the film Ashes in the Snow, and her other novels are currently in development for TV and film. Winner of the Carnegie Medal, Ruta is passionate about the power of history and literature to foster global awareness and connectivity. She has presented to NATO, to the European Parliament, in the United States Capitol, and at embassies worldwide. Ruta was born and raised in Michigan and now lives with her family in Nashville, Tennessee. Follow her on Twitter @RutaSepetys and Instagram @RutaSepetysAuthor.

Salt to the Sea (Paperback)