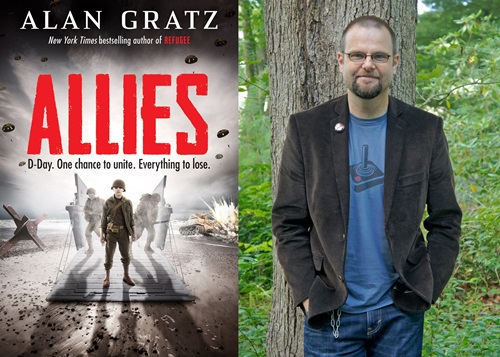 Join us at Congregation Beth Israel for this very special presentation by award-winning author Alan Gratz as he presents his new book, Allies. Mr. Gratz’ novel Refugee, is a Sasquatch Award nominee and is currently widely read in the Whatcom County schools!

On Allies: Welcome to D-Day. Dee Carpenter, a young U.S. soldier, is on a boat racing toward the French coast. Dee—along with his brothers-in-arms—is terrified. He feels the weight of World War II on his shoulders. But Dee is not alone. Behind enemy lines in France, a girl named Samira works as a spy, trying to sabotage the German army—and find her mother. At the same time, a paratrooper named James leaps from a plane to take part in a daring midnight raid. During the beach invasion, Henry, a medic, goes out into the bullets and bombs, searching for soldiers to save. In a breathtaking race against time, each of them must fight to complete their high-stakes missions. But with betrayals and deadly risks at every turn, can the Allies do what it takes to win? Expertly researched with a deft attention to detail, Gratz depicts yet another powerful, and heartening wartime story.

Alan Gratz is the New York Times bestselling author of several books for young readers, including Grenade; Refugee; Projekt 1065, a Kirkus Reviews Best Book of 2016; Prisoner B-3087, a Junior Library Guild selection that was named to YALSA's 2014 Best Fiction for Young Adults list; and Code of Honor, a YALSA 2016 Quick Pick. Alan lives in North Carolina with his wife and daughter.

Village Books is pleased to partner with Congregation Beth Israel on this community event!