Alec Ross, The Raging 2020s: Companies, Countries, People - And the Fight for Our Future - VIRTUAL EVENT 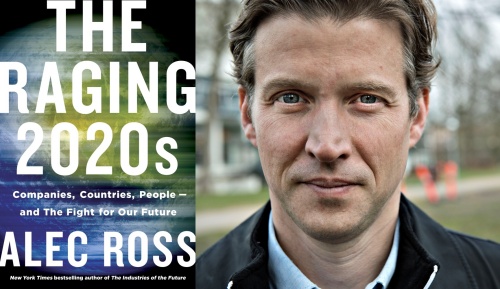 Join us for an event on a timely and fascinating topic: the complicated relationship between corporations and people. Alec Ross will be in conversation with hometown friend and Village Books Events Coordinator, Claire McElroy-Chesson.

For 150 years, there has been a contract. Companies hold the power to shape our daily lives. The state holds the power to make them fall in line. And the people hold the power to choose their leaders. But now, this balance has shaken loose. As the market consolidates, the lines between Walmart and the Halls of Congress have become razor-thin. Private companies have begun to behave like nations, and with the government bogged down in bureaucratic negotiations and partisan wars, people look to nimble, powerful firms to solve societal problems--and to be our moral standard-bearers ... Through interviews with the world's most influential thinkers and stories of corporate activism and malfeasance, government failure and renewal, and innovative economic and political models, Alec Ross proposes a new social contract--one that resets the equilibrium between corporations, the governing, and the governed.

Alec Ross is one of the world’s leading experts on innovation. Author of New York Times bestselling The Industries of the Future, he is currently a distinguished visiting professor at the University of Bologna Business School and a board partner at Amplo, a global venture capital firm. He previously served as Senior Advisor for Innovation to the Secretary of State. He began his career as a sixth-grade teacher in Baltimore.

The Raging 2020s: Companies, Countries, People - and the Fight for Our Future (Hardcover)

The Industries of the Future (Paperback)