Group Reading with Amy Roost and Contributors to Fury: Women's Lived Experiences During the Trump Era 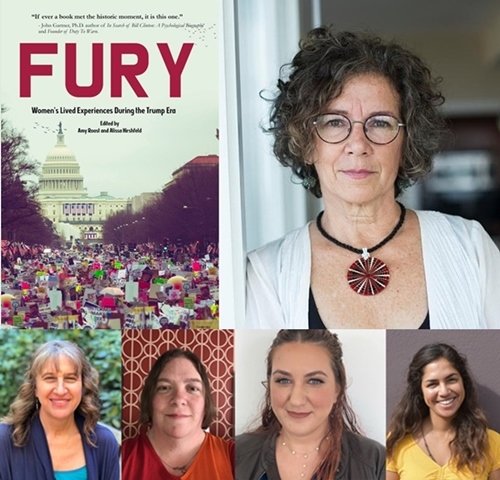 Join us in the Virtual Readings Gallery for this timely event, just two days after the first presidential debate! Amy will present with several contributors to the book.

Fury: Women’s Lived Experiences During the Trump Era brings together a diverse community of women who reveal the impact Donald Trump’s behavior, words, and presidency has had on each one of them, how each is confronting the problem, and how she is fighting back. Most readers will identify with more than one of these powerfully authentic and revealing personal essays representing a refreshingly broad representation of viewpoints. And that is exactly why Fury matters: it will help the reader feel less alone, work through some of their own hurt and pain, and formulate a plan for what they can do to bring about an end to the Trump presidency. Fury is a cohesive narrative of the times we live in, and chronicles a unique chapter in history for the edification of generations of women and allies to follow.

Amy Roost is a documentary podcaster and freelance journalist. She is an Annenberg School of Journalism 2019 California Health Journalism Fellow and recipient of numerous journalism awards for her op-ed columns appearing in San Diego Union Tribune publications.

Other contributors to present at this event:

Alissa Hirshfeld (co-editor) is a psychotherapist and writer.  She is the co-editor of Fury: Women’s Lived Experiences During the Trump Era, as well as the author of a novel, Living Waters: From Harvard Halls to Sacred Falls and a memoir, This Whole Wide World is Just a Narrow Bridge.  Her academic articles have appeared in several psychological journals.
Meg Weber writes memoir about sex, grief, love, family, therapy, and tangled relationships. She writes about edges, about experiences and identities that hover at the perimeter. Her debut memoir, A Year of Mr. Lucky, is forthcoming from Sincyr Publishing in 2020.
Sarah Mina Osman is a writer and teacher residing in Los Angeles, CA.  Her work has been in Argot Magazine, HelloGiggles, and Vocally. She loves to travel and has a deep appreciation for sloths.
Elena Perez works to advance environmental justice, address climate change, and engage marginalized populations to promote healthier and more resilient communities.