Ariel Sabar in Conversation with William Brennan, Veritas: A Harvard Professor, a Con Man and the Gospel of Jesus's Wife 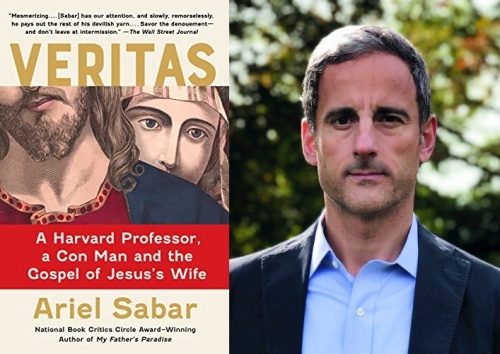 From National Book Critics Circle Award-winning author Ariel Sabar, the gripping true story of a sensational religious forgery and the scandal that shook Harvard. Join us on Zoom!

In 2012, Dr. Karen King, a star religion professor at Harvard, announced a breathtaking discovery just steps from the Vatican: she’d found an ancient scrap of papyrus in which Jesus calls Mary Magdalene “my wife.” The mysterious manuscript, which King provocatively titled “The Gospel of Jesus’s Wife,” had the power to topple the Roman Catholic Church. It threatened not just the all-male priesthood, but centuries of sacred teachings on marriage, sex, and women’s leadership, much of it premised on the hallowed tradition of a celibate Jesus.

Award-winning journalist Ariel Sabar covered King’s announcement in Rome but left with a question that no one seemed able to answer: Where in the world did this history-making papyrus come from? Sabar’s dogged sleuthing led from the halls of Harvard Divinity School to the former headquarters of the East German Stasi before landing on the trail of a Florida man with an unbelievable past. Could a motorcycle-riding pornographer with a fake Egyptology degree and a prophetess wife have set in motion one of the greatest hoaxes of the century? A propulsive tale laced with twists and trapdoors, Veritas is an exhilarating, globe-straddling detective story about an Ivy League historian and a college dropout—and how they worked together to pass off an audacious forgery as a long-lost piece of the Bible.

"One of the best books of the year." -  Smithsonian Magazine • Christian Science Monitor • The Minneapolis Star Tribune • Shelf Awareness

Finalist for the Investigative Reporters and Editors Book Award

Ariel Sabar is an award-winning journalist whose work has appeared in The Atlantic, The New York Times, Harper's Magazine, The Washington Post, and many other publications. He is the author of My Father's Paradise: A Son's Search for His Jewish Past in Kurdish Iraq, which won the National Book Critics Circle Award.

William Brennan is a freelance journalist and the winner of a 2020 National City and Regional Magazine Award for feature writing. His work appears in The Atlantic, The New York Times Magazine, New York, and other outlets. In 2016, he fact-checked Ariel Sabar’s Atlantic article “The Unbelievable Tale of Jesus’s Wife,” upon which Veritas is based.

Veritas: A Harvard Professor, a Con Man and the Gospel of Jesus's Wife (Paperback)

My Father's Paradise: A Son's Search for His Family's Past (Paperback)

Heart of the City: Nine Stories of Love and Serendipity on the Streets of New York (Paperback)