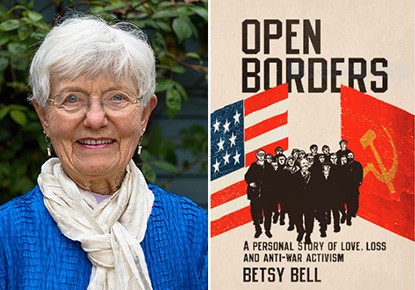 It is 1983, and the anti-war movement Target Seattle is preparing for a trip to Tashkent, Seattle’s Sister City in Uzbekistan. Travelling with 3,000 copies of a peace petition, as well as her husband, 17-year-old daughter and thirty others, Betsy sees first-hand the risks of travelling as an American to the USSR. She also sees the heart-warming stories of people-to-people connections across political boundaries. After returning to the US, Betsy pushes to find her own voice in a world where a wife’s goals are subservient to her husband’s. As tensions between the US and USSR are only increasing, Betsy speaks to elected officials and the United Nations in favor of open borders, even as conflicting aspirations and careers become a point of contention in her marriage. With honesty and poise, Betsy chronicles a history of a time when ordinary citizens were transformed into agents of peace. Open Borders includes essays from Dr. Roscius N. Doan, Craig Justice, Anne Stadler, and Richard Carter about the reach and influence of Target Seattle during the tumultuous 1980s.

Betsy Bell, mother, grandmother, business woman, is a longtime justice activist. Publications include poems in various chap books and magazines; a personal essay in The Oklahoma Review, a non-fiction piece, Sex, Death and Line Dancing, in Stratus, and an opinion piece on senior living in the Seattle Times. Born in New York City in 1937, she has witnessed firsthand the social upheaval created by WWII and the persistent fear of communist power from the USSR and its allies. Reaching across boundaries that separate us from The Other has been a constant thread in Betsy’s life. Twice widowed, Betsy has lived and worked in Seattle since 1969.

Hard Up and Hungry: Hassle Free Recipes for Students, by Students (Paperback)