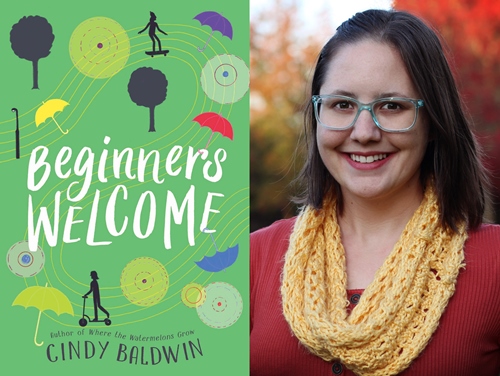 The acclaimed author of Where the Watermelons Grow is back with a story perfect for fans of Lynda Mullaly Hunt and Ali Benjamin, about finding friendship after a tragic loss.
Annie Lee’s daddy won’t stop leaving his record player on. His whiskers are in the sink every morning. And he always keeps the TV turned to Duke basketball. Except Annie Lee’s daddy died eighty-three days ago. Annie Lee doesn’t like the word “ghost,” but whatever is going on isn’t making things easier for her and Mama. Just like in her debut, Where the Watermelons Grow, Cindy Baldwin brings her signature twist of magic to this authentically heartfelt story.

Cindy Baldwin is a Carolina girl who moved to the opposite coast and is gamely doing her part in keeping Portland weird. As a middle schooler, she kept a book under her bathroom sink to read over and over while fixing her hair or brushing her teeth, and she dreams of someday writing just that kind of book. Her debut middle grade novel, Where the Watermelons Grow, received multiple starred reviews and was an Indies Introduce title, Indie Next pick, Bank Street Best Book of 2019, and Washington Post KidsPost Summer Book Club selection.

Where the Watermelons Grow (Paperback)