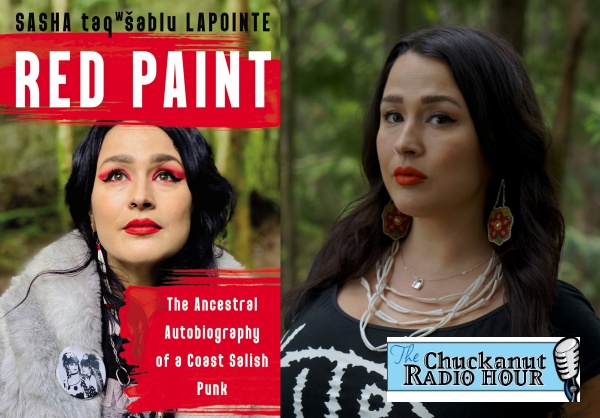 THIS EVENT IS SOLD OUT.

Join us at the Firehouse Arts and Events Center as we welcome Sasha Lapointe to the Radio Hour! Sasha LaPointe will be interviewed by local poet, writer, and storyteller Rebecca Mabanglo-Mayor.

Sasha taqwšəblu LaPointe has always longed for a sense of home. When she was a child, her family moved around frequently, often staying in barely habitable church attics and trailers, dangerous places for young Sasha.
With little more to guide her than a passion for the thriving punk scene of the Pacific Northwest and a desire to live up to the responsibility of being the namesake of her beloved great-grandmother—a linguist who helped preserve her Indigenous language of Lushootseed—Sasha throws herself headlong into the world, determined to build a better future for herself and her people.
Set against a backdrop of the breathtaking beauty of Coast Salish ancestral land and imbued with the universal spirit of punk, Red Paint is ultimately a story of the ways we learn to find our true selves while fighting for our right to claim a place of our own.
Examining what it means to be vulnerable in love and in art, Sasha offers up an unblinking reckoning with personal traumas amplified by the collective historical traumas of colonialism and genocide that continue to haunt native peoples. Red Paint is an intersectional autobiography of lineage, resilience, and, above all, the ability to heal.

"Red Paint is a miraculous book. With each potent sentence, she shows us what access to power looks like. She shows us how to become whole.”

"Steeped in punk music and poetry, Red Paint is an ode to Indigenous inheritance, and to the work and wisdom necessary to recover from the legacies of trauma."

Sasha taqwšəblu LaPointe is a Coast Salish author from the Nooksack and Upper Skagit Indian tribes. She received a double MFA in Creative Nonfiction and Poetry from the Institute of American Indian Arts. She lives in Tacoma, Washington.

Rebecca Mabanglo-Mayor’s non-fiction, poetry, and short fiction have appeared in print and online in several journals and anthologies including Katipunan Literary Magazine, Growing Up Filipino II: More Stories for Young Adults, Kuwento: Small Things, and Beyond Lumpia, Pansit, and Seven Manangs Wild: An Anthology. Her poetry chapbook Pause Mid-Flight was released in 2010. She is also the co-editor of True Stories: The Narrative Project Vols. I-IV, and her poetry and essays were collected in Dancing Between Bamboo Poles in 2019. She has been performing as a storyteller since 2006 and specializes in stories based on Filipino folktales and Filipino-American history. She received her MFA in Creative Writing in 2012 from Pacific Lutheran University.

*Online registration closes one hour prior to the event. Spaces may be available at the door.