Dan Chard, Nixon’s War at Home: The FBI, Leftist Guerrillas, and the Origins of Counterterrorism IN PERSON 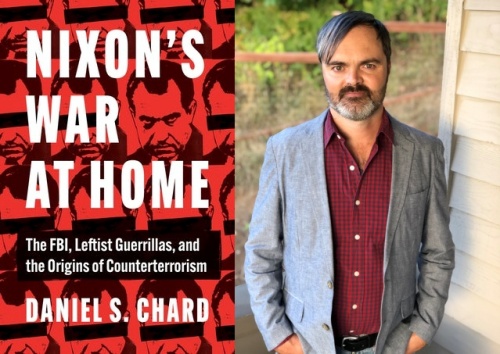 Join us in the Readings Gallery for an event with a visiting WWU Professor of History! Spaces are limited and REGISTRATION IS REQUIRED to secure your spot so don't delay. Your $5 ticket is also a voucher towards a purchase at the event!

COVID protocol for our in-person events requires masks for all attendees and proof of full vaccination upon arrival. Thank you for your cooperation.

During the presidency of Richard Nixon, homegrown leftist guerrilla groups like the Weather Underground and the Black Liberation Army carried out hundreds of attacks in the United States. The FBI had a long history of infiltrating activist groups, but this type of clandestine action posed a unique challenge. Drawing on thousands of pages of declassified FBI documents, Daniel S. Chard shows how America's war with domestic guerillas prompted a host of new policing measures as the FBI revived illegal spy techniques previously used against communists in the name of fighting terrorism. These efforts did little to stop the guerrillas—instead, they led to a bureaucratic struggle between the Nixon administration and the FBI that fueled the Watergate Scandal and brought down Nixon. Yet despite their internal conflicts, FBI and White House officials developed preemptive surveillance practices that would inform U.S. counterterrorism strategies into the twenty-first century, entrenching mass surveillance as a cornerstone of the national security state.
Connecting the dots between political violence and "law and order" politics, Chard reveals how American counterterrorism emerged in the 1970s from violent conflicts over racism, imperialism, and policing that remain unresolved today.

Daniel S. Chard is Visiting Assistant Professor of history at Western Washington University. He co-edited Science for the People: Documents from America's Movement of Radical Scientists (2018) and his writing has appeared in outlets such as Jacobin, Radical History Review, The Sixties, and Washington Post.

* Online registration closes one hour prior to the event. Walk-ins will be welcome if there are available spaces.

Nixon's War at Home: The Fbi, Leftist Guerrillas, and the Origins of Counterterrorism (Justice) (Hardcover)