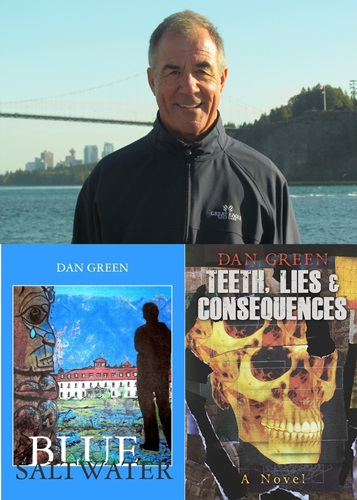 Join us in the Readings Gallery for a presentation on both novels by Canadian author, Dan Green! His first novel, Blue Saltwater, published in 2010, chronicles an aboriginal teenager's struggle to escape the Indian Residential School System and return to his ancestral homeland of Haida Gwaii. His second novel Teeth, Lies and Consequences, published in 2016, tells the story of a German dentist, Friedrich Mueller, who after being discovered concealing his Jewish ancestry, takes an oath never to reveal a secret but goes back on his word to save the life of his son.

After a career practicing dentistry in West Vancouver, BC, Dan Green studied creative writing at the University of British Columbia. He has two published books to his credit, Blue Saltwater and Teeth, Lies and Consequences. He is currently adapting Blue Saltwater into a screenplay.