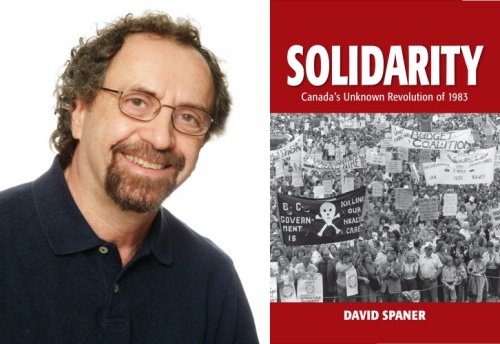 Join us in the Readings Gallery to hear about a little-remembered piece of Canadian history.

We are still operating at a limited capacity so we recommend pre-registering on Eventbrite.

COVID protocol for our in-person events requires proof of full vaccination upon arrival to the Readings Gallery. Masks are optional. Thank you for your cooperation.

The year 1983 began like any other year in Canada’s West Coast province. Then suddenly everything changed when the newly elected provincial government announced an avalanche of far-right legislation that shocked the country. In response, a resistance movement called Solidarity quickly formed across British Columbia uniting social activists, trade unionists and people who had never protested before. The movement rocked social foundations resulting in massive street protests, occupations, and plans for an all-out general strike.
Filled with revealing interviews and lively, insightful prose, Solidarity goes behind the scenes of one of the greatest social uprisings in North American history. In revisiting this one singularly dramatic event, Solidarity chronicles the history of 20th century British Columbia, exploring its great divides and alliances, cultures and subcultures, and conflicts that continue into the 21st century.

“His book rescues an important moment in B.C. history from mainstream amnesia and does so in stylish, effective prose. Highly recommended.” – Tom Sandborn, Vancouver Sun

“It’s a story that cries out to be told.” – Rod Mickleburgh, BC BookWorld

“One of the more engaging books of the season, a terrific book of history” – Joseph Planta “the commentary” podcast

David Spaner has worked as a feature writer, movie critic, reporter, editor for numerous newspapers and magazines and been a cultural/political organizer (Yippie, manager of the punk band The Subhumans). He is the author of Dreaming in the Rain: How Vancouver Became Hollywood North by Northwest and Shoot It! Hollywood, Inc. and the Rising of Independent Film. He lives in Vancouver.

Shoot It!: Hollywood Inc. and the Rising of Independent Film (Paperback)