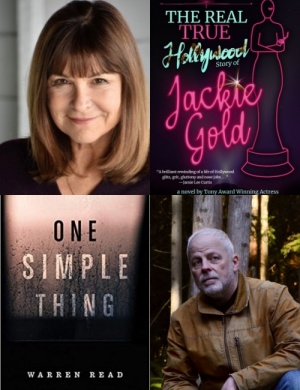 COVID protocol for our in-person events requires masks for all attendees and proof of full vaccination upon arrival to the Readings Gallery. Thank you for your cooperation.

Award-winning actor and director Dinah Manoff offers an honest glimpse behind the red carpet in her novel about a Hollywood star, her improbable Malibu upbringing, and her closet full of tabloid-worthy secrets.
Jackie Gold is a tabloid cover girl with a walk-in closet full of secrets and a pack of bloodthirsty paparazzi snapping at her high-heels. From the hospital bed where she lies fighting for her life, Jackie narrates her life story while press and public speculate on everything from whether “Jackie’s Jump!” was a suicide attempt, to whether or not her breasts are real. The novel switches back and forth from the life-or-death drama unfolding in the hospital and Jackie’s reflections on her improbable show business upbringing and the events that led her to this moment in time.
When we meet Jackie she is at the peak of her career. She’s been offered the role of a lifetime and her equally famous boyfriend is People’s Sexiest Man of the Year. But her life takes an unexpected and terrible turn when the paparazzi storm her hotel room… “….And not until my robe billows up over my head like a broken parachute do I realize I have missed the mark. I wish I could tell you that my life then went before me in slow motion, or that I thought of Brett, or my family, or even about how Nicole had betrayed me, but my last thought before striking the rocks was, Thank God I’m wearing nice underwear.” Jackie’s journey is a coming of age in Hollywood, both treacherous and hilarious. A story of secrets revealed and relationships shattered and mended.

Dinah Manoff is an award-winning actor and director. She has written for both stage and television and had several short stories presented at the prestigious writer's forum Spoken Interludes and recorded for KCRW. She has had numerous roles on stage and in film, among them, Grease, Ordinary People, and Child's Play. Dinah has starred in the television series, Soap, Empty Nest, and State of Grace. She received a Tony award for her role in Neil Simon's play, "I Ought to Be in Pictures", and won the prestigious L.A. Theater award for her stage adaptation and direction of her father's novel, A Telegram for Heaven. Dinah is the daughter of actress/director Lee Grant and the late writer Arnold Manoff; she resides with her husband and sons in the Seattle area. The Real True Hollywood Story of Jackie Gold is her first novel.

On One Simple Thing: When his father leaves town, twelve-year-old Rodney Culver’s mother takes up with Otis Dell, a fry cook at the local diner―and a well-known petty thief. While Rodney resists the man’s influence at first, Otis soon draws the boy into his small-time criminal world. After a simple heist goes violently wrong, Rodney becomes an unwitting fugitive, swept away from his mother to the primitive mountain sanctuary of the mysterious Lester Fanning. But with Lester’s skeptical lady friend in the way, and the town sheriff grappling with a curiously placed corpse, what once seemed like an easy plan quickly devolves into a knot of complications.
A tense, layered story of misguided allegiances and sheer desperation, One Simple Thing is the kind of “grit lit” that belongs with such writers as Daniel Woodrell, Per Petterson and Charles Portis.

Warren Read is the author of a 2008 memoir, The Lyncher in Me, about his discovery that his great-grandfather had incited a lynching in 1920, and the 2017 novel, Ash Falls, which was called "a moody, haunting foray into rural Americana in the mold of Daniel Woodrell and Christian Kiefer," by Kirkus. His fiction has been published in Hot Metal Bridge, Mud Season Review, Sliver of Stone, Inklette, Switchback and The Drowning Gull. In addition, he has had two short plays directed and produced by Tony winner Dinah Manoff. Warren earned his MFA from the Rainier Writing Workshop at Pacific Lutheran University. Learn more about Warren at www.warren-read.com.

* Online registration closes one hour prior to the event. Walk-ins will be welcome if there are available spaces.

The Lyncher in Me: A Search for Redemption in the Face of History (Paperback)