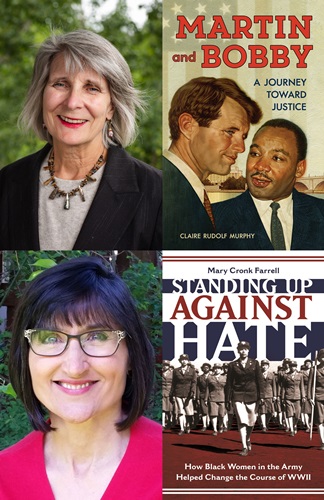 Join us as we kick off Black History month with two great middle grade authors in one night! Many of us tiptoe around talking about race because the rhetoric has grown so heated and even well-meaning people can fall into micro-aggression and offend others. Yet, it's critical that we talk if we want to move toward greater justice. Washington authors Mary Cronk Farrell and Claire Rudolf Murphy will share challenges of writing about race and a panel of local activists will discuss how white people can show up for racial justice. Panel includes Judith Entwife, President of the Bellingham American Association of University women (AAUW) who will offer practical suggestions for supporting intersectionality.

On Standing Up Against Hate: How Black Women in the Army Helped Change the Course of WWII; the first blacks in the Women’s Army Corps didn’t have full protection of the law in
America. Still, thousands volunteered to help fight fascist regimes threatening democracy around the world. First they faced the enemy at home. They risked court martial and prison, refusing to clean kitchens and scrub floors, jobs never assigned to white WACs. They feared for their lives while posted or traveling in the south, as even army uniforms didn’t protect them from assault due to their skin color. They survived racism and prejudice with dignity, served with excellence and paved the way for black women to reach the highest levels of the military.

Mary is an award-winning author and former journalist with a passion for stories about people discovering courage amidst adversity. She’s appeared on TV and radio and speaks about courage and grit to adults and young people across the nation. Read her weekly stories that inform and inspire at www.MaryCronkFarrell.com.

Martin & Bobby: A Journey Toward Justice follows the lives and final days and words of Martin Luther King, Jr., and Robert Kennedy, showing how and where their work intersected and how their initially wary relationship evolved from challenging and testing each other to finally “arriving in the same place” in 1968, as allies fighting poverty and racism. Fifty years later, the lives and words of Kennedy and King still offer Americans inspiration and insight on how our country can face the historic challenges of economic and racial inequality.

Claire is the author of 18 award-winning fiction and nonfiction books for children and young adults, including Marching With Aunt Susan: Susan B. Anthony and the Fight for Women’s Rights, My Country Tis of Thee: How One Song Reveals the History of Civil Rights, illustrated by Bryan Collier. Claire began her writing career in Alaska, where she lived for 24 years. Today she lives and writes in her hometown of Spokane, Washington. Since 2008 she has taught in Hamline University‘s low residency Writing for Children and Young Adults (MFAC) graduate program. Recent events have renewed her deep-seated passion for political activism. She enjoys music and outdoor activities with her husband, two grown children and their spouses, and grandson in Seattle.

Standing Up Against Hate: How Black Women in the Army Helped Change the Course of WWII (Hardcover)

Martin and Bobby: A Journey Toward Justice (Hardcover)

Marching with Aunt Susan: Susan B. Anthony and the Fight for Women's Suffrage (Paperback)

My Country, 'Tis of Thee: How One Song Reveals the History of Civil Rights (Hardcover)

Children of the Gold Rush (Paperback)