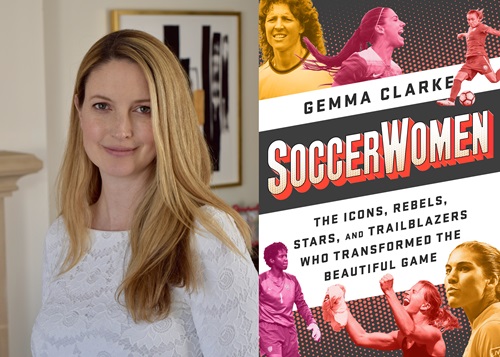 This event has been cancelled until further notice.

The Women’s World Cup will take place from June 7 to July 7, 2019. With the 2015 Women’s World Cup Final as the most watched soccer match in US history (male or female) with over 26 million viewers, this next tournament is bound to be even more popular. But women’s soccer wouldn’t be so popular, had it not been for the players working their magic on (and off) the field. In Soccerwomen: The Icons, Rebels, Stars, and Trailblazers Who Transformed the Beautiful Game, British sports journalist Gemma Clarke profiles 50 women who helped make the beautiful game what it is today.

“Behind every kick of the ball in women’s soccer is the power of all the women who made it possible,” writes Clarke. Given the hardships and discrimination they face, women who play soccer professionally are so much more than elite athletes. They are survivors, campaigners, political advocates, feminists, LGBTQ activists, working moms, staunch opponents of racial discrimination and inspirational role models for many. This book is a testament to their lives both public and private, a love letter to soccer, a heartfelt thank you and look to the future. Based on original interviews with more than 50 current and former players and coaches, Soccerwomen celebrates the remarkable women—including champions like Mia Hamm, Brandi Chastain, Abby Wambach, Brazil’s Sissi and Marta, China’s Sun Wen, and future stars like Mallory Pugh and Sam Kerr—who have inspired girls around the world to love the sport.

Gemma Clarke is a British sports journalist based in the US. She has written about soccer for The Guardian, The Observer, The Times (UK), the Daily Telegraph and the London Evening Standard. She was writer and editor of the League Leader and the first female publications editor for a Premier League soccer club. She wrote minute-by-minute reports on the FIFA Men’s World Cup for The Guardian online, as well as reporting on the Women’s European Championships and the Men’s Blind World Cup. She worked as a production assistant at Sky Sports News and as a stringer for the sports news agency Hayters Teamwork.

Soccerwomen: The Icons, Rebels, Stars, and Trailblazers Who Transformed the Beautiful Game (Paperback)