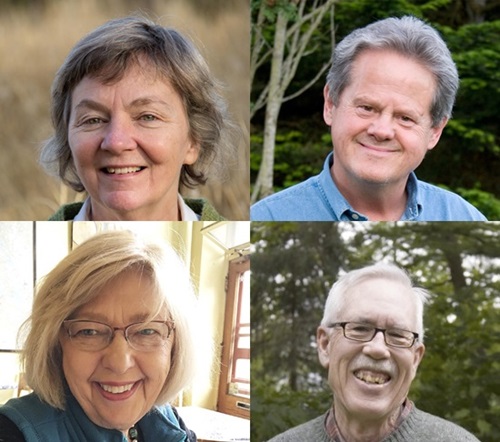 Join us in the Readings Gallery for a night of local poetry from some of the PNW’s best! These four Northwest poets write accessible poems with humor, insight, and depth. This promises to be a fun evening, maybe a memorable one.

James Bertolino has been recognized nationally by a Book-of-the-Month Club Fellowship, the Discovery Award, and others. Some of his recent books are Finding Water, Holding Stone; Pocket Animals; and Ravenous Bliss: New and Selected Love Poems (MoonPath Press), about which poet Ellen Bass said,“These poems are full of resonant natural images and shine with Bertolino’s full open heart.” He has taught creative writing at Western Washington University and co-publishes the local Egress Studio Press with his wife, Anita K. Boyle.

Anita K. Boyle is a poet and artist from just outside Bellingham. Her books include What the Alder Told Me (MoonPath Press) and Bamboo Equals Loon (Egress Studio Press), and several collaborative poetry books written with James Bertolino. Through Egress Studio Press, she has published a dozen or so poets from Washington State, such as Jed Myers (2018) and David Ossman (2019).

Gayle Kaune, from Port Townsend, is the author of three books, Still Life in The Physical World (Blue Begonia Press), All the Birds Awake, and Noise from Stars (both from Tebot Bach). She writes poems blessed by the ordinary. Kaune has published in magazines such as Poet And Critic, Seattle Review, and Crab Creek Review. She won four Washington State Poet’s Association awards. “Kaune moves from chronicle to insight,” said Judith Kitchen. “She takes us out far and in deep… in favor off open-eyed wonder.”

Richard Widerkehr has two books of poems, In the Presence Of Absence (MoonPath Press) and The Way Home (Plain View Press), along with three chapbooks and a novel. He earned his M.A. from Columbia University, won two Hopwood first prizes for poetry at the University of Michigan and first prize for a short story at the Pacific Northwest Writers Conference. Recent work has appeared in Writer’s Almanac, Verse Daily, Crab Creek Review, and others. About Her Story of Fire (Egress Studio Press), Erin Belieu says these poems are “concise, carved, contemporary, and incantatory.”

Every Wound Has A Rhythm (Paperback)

What the Alder Told Me (Paperback)

All the Birds Awake (Paperback)

In the Presence of Absence (Paperback)

Her Story of Fire (Paperback)