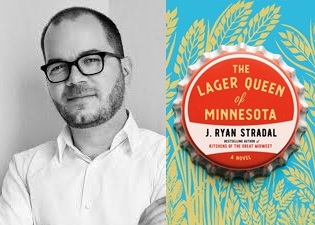 Join us at Evolve Chocolate + Cafe for a celebration of women and beer, and a great new book! We’re hosting a meal with the author of Kitchens of the Great Midwest. Chef Christy will fashion a meal where each course is inspired by the book and we’ll have a guest brewer on hand pairing tasty beers with different elements of the story. This is truly a book-crafted meal and it’s sure to be delicious!

The Lager Queen of Minnesota centers around a family of women and their special relationship with beer. Two sisters, one farm. A family is split when their father leaves their shared inheritance entirely to Helen, his younger daughter. With the proceeds from the farm, Helen builds one of the most successful light breweries in the country and makes their company motto ubiquitous: “Drink lots. It’s Blotz.”

Here we meet a cast of lovable, funny, quintessentially American characters eager to make their mark in a world that’s often stacked against them. In this deeply affecting family saga, resolution can take generations, but when it finally comes, we’re surprised, moved, and delighted.

J. Ryan Stradal is a contributing editor at TASTE Magazine. His writing has appeared in The Wall Street Journal, The Guardian, Granta, The Rumpus, and the Los Angeles Review of Books, among other places. Born and raised in Minnesota, he now lives in Los Angeles, where he co-hosts a culinary-themed reading series called Hot Dish. He has also worked as a TV producer, notably for Ice Road Truckers and Deadliest Catch.

Tickets are $75 and include a signed copy of The Lager Queen of Minnesota. Tickets are available at Village Books or on Eventbrite. Seating is limited so get your tickets now!

The Lager Queen of Minnesota: A Novel (Hardcover)

Kitchens of the Great Midwest: A Novel (Paperback)