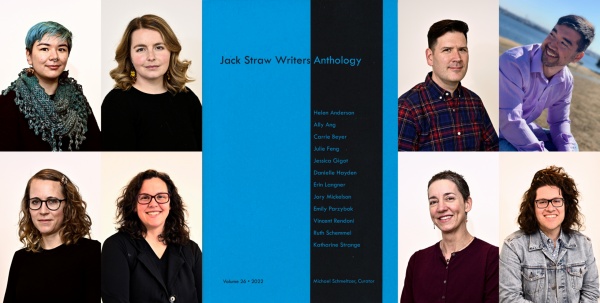 The Jack Straw Writers are coming back for a group reading of their latest anthology. Don't miss it!

About the writers:
2022 Jack Straw  Writers Program Curator Michael Schmeltzer is a biracial author originally from Japan. He currently lives in Seattle where he serves as Editor-in-Chief of Floating Bridge Press. His poetry book Empire of Surrender (2022) is the winner of the 2021 Wandering Aengus Book Award. Along with Meghan McClure, he is the co-author of the nonfiction book A Single Throat Opens, a lyric exploration of addiction and family. His debut full-length Blood Song was a finalist for the Washington State Book Award in Poetry, the Julie Suk Award, and the Coil Book Award. His honors include a 2019 Jack Straw Fellowship, the Gulf Stream Award for Poetry, and Blue Earth Review’s Flash Fiction Prize. He has been a finalist for the Four Way Books Intro and Levis Prizes, the Zone 3 Press First Book Prize, the John Ciardi Prize for Poetry from BkMk Press, the OSU Press/The Journal Award in Poetry, and most recently the Jake Adam York Prize.

Ally Ang is a gaysian poet living on occupied Duwamish and Coast Salish lands known as Seattle. Ally’s work has appeared in Nepantla: An Anthology Dedicated to Queer Poets of Color, The Journal, Foglifter, Palette Poetry, and elsewhere, and their work has been nominated for the Pushcart Prize, Best of the Net, and Bettering American Poetry. They are the co-editor of an anthology of Southeast Asian art and writing titled All the Oils: On Friendship, Sex, and Other Warmths (Ginger Bug Press 2021) and they are an editor for Game Over Books. Ally received their MFA from the University of Washington and they currently work at Hugo House, a Seattle-based literary arts nonprofit.

Jessica Gigot is a poet and farmer. Her second book of poems, Feeding Hour (Wandering Aengus Press, 2020), won a Nautilus Award and was a finalist for the 2021 Washington State Book Award. Jessica’s writing and reviews appear in several publications, such as Orion, Taproot, Terrain.org, Gastronomica, and Poetry Northwest. She is currently a poetry editor for The Hopper. Her memoir, A Little Bit of Land, will be published by Oregon State University Press in 2022.

Erin Langner is an essayist whose work focuses on art, architecture and identity. She is a regular contributor to Hyperallergic and METROPOLIS magazines. Her writing has also appeared or is forthcoming in december, The Offing, The Normal School, Hobart, The Stranger, and ARCADE. She lives in Seattle and works on exhibitions and publications at the Frye Art Museum. Her debut collection, Souvenirs from Paradise, will be published by Zone 3 Press in 2022.

Jory Mickelson (they/them) is a queer, non-binary writer who was raised by two visual artists. They received their BA in English from Western Washington University and their MFA in poetry from the University of Idaho. Their work can be found in Court Green, Painted Bride Quarterly, Jubilat, Sixth Finch, Ninth Letter, Diode, and The Rumpus.  They are currently working on poems that explore the intersection of visual art, queerness, erasure, gender, and history. Their first book, Wilderness//Kingdom (2019) was the inaugural winner of Floating Bridge Press’ Evergreen Award Tour and the 2020 High Plains Book Award winner in poetry. They received fellowships from the Port Townsend Writers Conference, Lambda Literary Foundation, Winter Tangerine, and the Helene Wurlitzer Foundation of New Mexico.

Emily Parzybok is a writer, political consultant and teacher from Seattle. She serves as the Executive Director of Balance Our Tax Code advocating for progressive solutions to balance the tax code at the state legislature and on the ballot. She is a writer and an MFA candidate at New York University’s low residency program. Her work has been published in Poetry Northwest, The Syndrome Mag and Points in Case. She has work forthcoming in the Uncertain Girls, Uncertain Times anthology, a collection of inspiration and encouragement for young women. Above all else, she is a dedicated reader who can often be found in bed with her three cats, a cup of breakfast tea and a book. You can write with her at A Very Important Meeting!

Vincent Antonio Rendoni (he / him / his) is a Seattle-based poet and writer. He is the winner of Blue Earth Review’s 2021 Annual Flash Fiction Contest. He is a contributor to What They Leave Behind: A Latinx Anthology. His work has appeared / will be appearing in the Texas Review, Juked, Fiction Southeast, Sky Island Journal, Door is a Jar, and more. He received his BA from Western Washington University and MFA in Creative Writing from Chatham University. He has previously taught poetry and fiction in the Allegheny County Jail as part of the Words Without Walls program in Pittsburgh, PA. His work focuses on the intersection of family, truth, death, and the mixed-race/Latinx experience.

Ruth Schemmel’s short fiction has appeared in Bellevue Literary Review, Fiction, and New Orleans Review, among other places. She has been a finalist in Glimmer Train’s Fiction Open and a fifth-place overall winner in the NYC Midnight Short Fiction Challenge. A former Peace Corps volunteer, she works as a teacher of high school English language learners in the greater Seattle area, where she lives with her family.