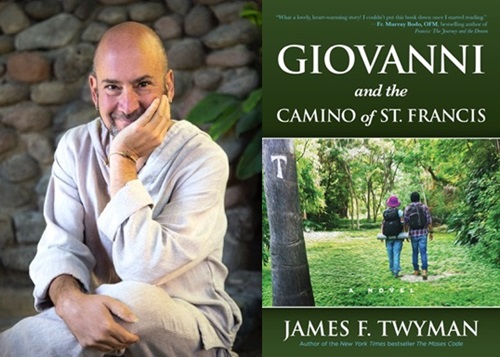 When a guide to the Camino of St. Francis falls off a shelf and knocks her on the head, Anna reluctantly answers the call to return to Italy for the first time since being shunned by her family. As she travels in the steps of Saint Francis in an attempt to reconcile her past, she meets a young man named Giovanni and finds herself opening up to the miracles that surround them.

James Twyman is the author of sixteen books, including the NYT Bestseller The Moses Code. Known as the Peace Troubadour, he has been invited by world leaders and peace organizations to perform the Peace Concert in countries such as Iraq, Croatia, Bosnia, and South Africa—often while wars or conflicts raged around him. During many of these trips, he drew millions of people together to pray for peace during worldwide peace meditations. James has produced and/or directed seven feature films, including award winners Indigo and Redwood Highway, and has produced twelve music CDs, including the I AM Wishes Fulfilled Meditation (with Dr. Wayne Dyer), which was a Billboard Charts #1 bestseller. He was also the founder of The Seminary of Spiritual Peacemaking, which has ordained over 600 ministers from around the world. James currently lives in Ajijic, Mexico and is the director of the Namaste Lake Chapala spiritual community.

Giovanni and the Camino of St. Francis (Paperback)

The Moses Code: The Most Powerful Manifestation Tool in the History of the World (Hardcover)

The Barn Dance: Somewhere between Heaven and Earth, there is a place where the magic never ends . . . (Paperback)

The Proof: A 40-Day Program for Embodying Oneness (Paperback)