This feature require that you enable JavaScript in your browser.
END_OF_DOCUMENT_TOKEN_TO_BE_REPLACED

Johanna Garton, Edge of the Map: The Mountain Life of Christine Boskoff 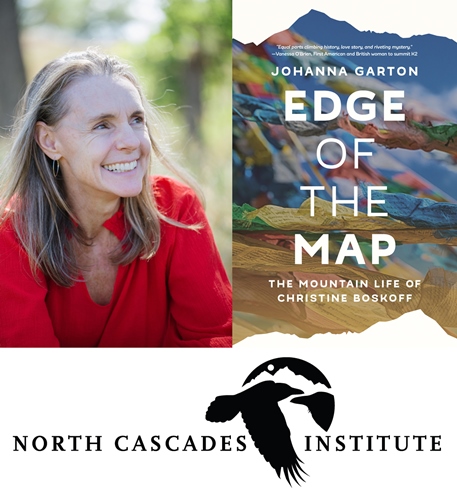 Join us for a very special installment of North Cascades Institute's Nature of Writing Speaker Series with Edge of the Map: The Mountain Life of Christine Boskoff author Johanna Garton!

Groundbreaking. World-class. Legendary. All have been used to describe Christine Boskoff, one of the world's top alpinists, a trailblazing record holder who overcame challenge after challenge...until she and her partner, renowned climber Charlie Fowler, disappeared. This is her story.
Johanna will share an inspiring presentation on the life of Christine Boskoff and the legacies she left behind from her adventures climbing the highest mountains in the world. From her roots in the Midwest to the leadership of Seattle-based adventure travel company Mountain Madness, you’ll learn what drove Chris to become the only American woman to summit six of the world’s 8,000-meter peaks and follow her meteoric rise in the sport as she climbed alongside a cast of legendary alpinists and Sherpas.

Johanna Garton interviewed more than seventy-five friends and family of Christine Boskoff and Charlie Fowler in writing Edge of the Map, including notable climbers such as Peter Habeler, Nazir Sabir, Willie Benegas, Phil Powers, Mark
Gunlogson (current owner of Mountain Madness), Hector Ponce de Leon, Steve Swenson, and Conrad Anker. Conversant in Mandarin, Garton conducted several weeks of research and interviews near the site of Boskoff’s death in China.
Not a mountaineer but a marathoner herself, Garton was drawn to Boskoff’s story for deeply personal reasons: hailing from the same small Midwestern hometown, and in fact attending high school together though they never met, Garton and Boskoff’s paths seemed destined to intersect. When Boskoff went missing in 2006, Garton’s mother, also a journalist, began a ten-year deep dive into Boskoff’s story as well as a close friendship with Boskoff’s mother. She devoted herself to this project until a diagnosis of Parkinson’s disease made it clear that Garton was meant to pick up where she left off and ensure Boskoff’s story was told. Garton is a journalist, attorney, and non-profit consultant who lives in Denver. Edge of the Map is her second book.

This event is part of the Nature of Writing Series, in partnership with the North Cascades Institute.