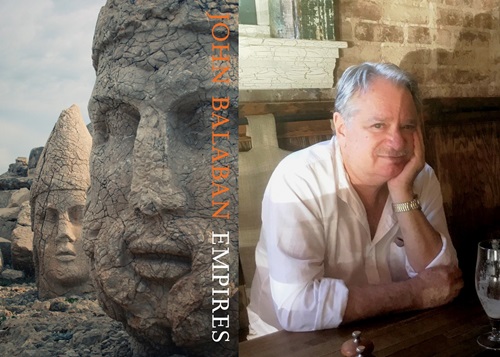 Empires is about tremors in history as imperial eras come to their ends — those interludes when the understood order of things has changed. The poems move through time, around the world, and across the U.S.A. From ancient Ionia to viking traders on the Volga, Spanish herders abandoned to the southwest's Llano Estacado, Christmas Eve by the Delaware, 1776, Anna Akhmatova waiting outside Lefortovo Prison, a Romanian Jew waiting for the Nazis to come for him in Paris, our 9/11, and riding a train through Dixie after Obama's election. The task of poetry is to maintain what endures.

John Balaban is the author of 13 books of poetry and prose, including four volumes which together have won The Academy of American Poets Lamont prize, a National Poetry Series Selection, and two nominations for the National Book Award. His Locusts at the Edge of Summer: New and Selected Poems won the 1998 William Carlos Williams Award from the Poetry Society of America. In 2003, he was awarded a John Simon Guggenheim Fellowship. In 2005, he was a judge for the National Book Awards. He has read widely in the U.S. and abroad, most recently at University College, Dublin, and at Oxford and Cambridge Universities. Balaban served as a conscientious objector during the war in Vietnam. In addition to writing poetry, fiction, and nonfiction, he is a translator of Vietnamese poetry, and a past president of the American Literary Translators Association. In 1999, with two Vietnamese friends, he founded the Vietnamese Nôm Preservation Foundation (http://nomfoundation.org). In 2008, he was awarded a medal from the Ministry of Culture of Vietnam for his translations of poetry and his leadership in the restoration of the ancient text collection at the National Library. In 2016, he received the George Garrett Award from the Associated Writing Programs.

Locusts at the Edge of Summer: New and Selected Poems (Paperback)