Katharine Hayhoe in Conversation with Forrest Inslee, Saving Us: A Climate Scientist's Case for Hope and Healing in a Divided World VIRTUAL EVENT 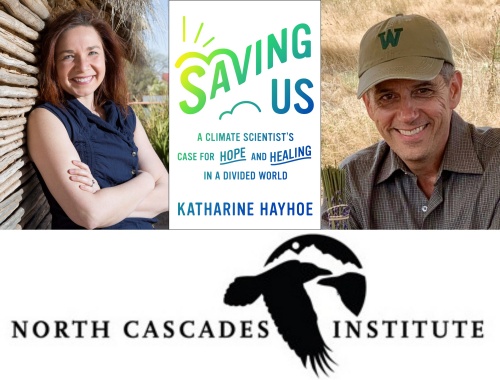 Join us on Zoom for another great event as part of the Nature of Writing series, in partnership with our friends at the North Cascades Institute. Dr. Hayhoe will be joined in conversation by Dr. Forrest Inslee.

In SAVING US: A Climate Scientist's Case for Hope and Healing in a Divided World Hayhoe demonstrates that whether you’re a parent or a person of faith, a beachgoer or a dedicated foodie, climate change affects someone or something you already care about. While others offer doomsday scenarios and point fingers of blame, Hayhoe approaches this topic with optimism and inclusivity. She argues that climate action isn’t about being a certain type of person or voting a certain way. It’s about connecting the values we already have, to act for our future. A leading expert on the science, impacts, and communication of climate change, Hayhoe has been profiled in The New York Times, the Washington Post, People, and Rolling Stone, and her TED Talk titled “The most important thing you can do to fight climate change: talk about it” has been viewed almost 4 million times. She gives nearly a hundred talks a year to audiences ranging from corporate symposiums, top-tier universities, and global climate summits to local churches, schools, and city council meetings.

Saving Us is the result of thousands of conversations she’s had with people from all walks of life, from the oil and gas tycoon who insists “we’re not the bad guys” to the college instructor angry that “the EPA is just making all of this up to take away my wood-burning stove” to the NASA scientist frustrated that “my friends don’t see it like I do.” Drawing equally from interdisciplinary research and personal stories, Hayhoe shows how small conversations can have astonishing results. Saving Us shows readers how each of us has a role to play in changing the world.

In addition to serving as Chief Scientist for TNC, Katharine Hayhoe is the Endowed Professor in Public Policy and Public Law and Paul W. Horn Distinguished Professor at Texas Tech University. She served as a lead author for the Second, Third, and Fourth US National Climate Assessment and hosts the PBS digital series Global Weirding. She is the Climate Ambassador for the World Evangelical Alliance and has been named one of Time’s “100 Most Influential People,” Fortune’s “50 Greatest Leaders,” and Foreign Policy’s “100 Leading Global Thinkers.”

Dr. Forrest Inslee is the editor of Christ & Cascadia, a journal focused on innovative faith praxis in the Pacific Northwest and a curriculum design consultant at The Seattle School. In his role as Associate Director of Circlewood, a faith-based environmental advocacy nonprofit, he hosts the Earthkeepers podcast, and helps to develop creation care education initiatives.

Saving Us: A Climate Scientist's Case for Hope and Healing in a Divided World (Hardcover)