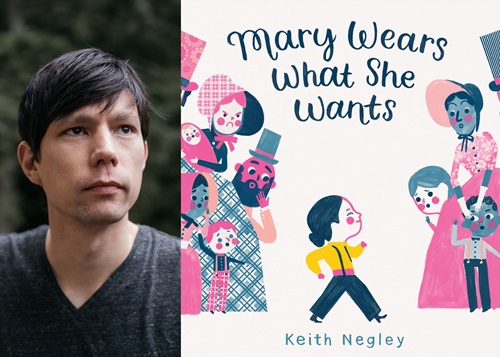 We are pleased to bring Keith Negley back to the Readings Gallery for his newly-released picture book, Mary Wears What She Wants. And it's perfect for March, Women's History Month! Based on the true story of Mary Edwards Walker, a trailblazing 19th-century doctor who was arrested many times for wearing pants, this book is chock-full of Negley's gorgeous illustrations.

Once upon a time (but not that long ago), girls only wore dresses. And only boys wore pants. Until one day, a young girl named Mary had an idea: She would wear whatever she wanted. And she wanted to wear pants! This bold, original picture book encourages readers to think for themselves while gently challenging gender and societal norms.

Keith Negley is the author and illustrator of My Dad Used to Be So Cool and Tough Guys (Have Feelings Too). He has received the Gold Medal from the Society of Illustrators as well as recognition from American Illustration. His imaginative artwork has appeared in the New York Times, the New Yorker, Time, and countless other national publications. When Keith gets to wear what he wants it’s usually pajamas, but nobody gets excited about that except Keith. He lives with his family in the mountains of Bellingham, Washington, surrounded by giant spiders.

Mary Wears What She Wants (Hardcover)

Tough Guys Have Feelings Too (Hardcover)

My Dad Used To Be So Cool (Hardcover)