Kristin Hannah in conversation with Christina Dodd, The Four Winds 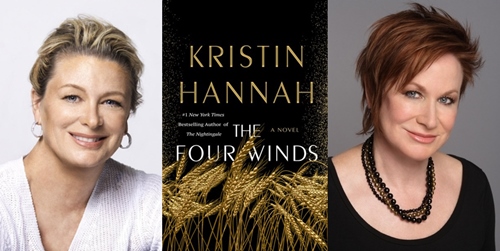 Join us for an evening on Zoom with these two fabulous fiction writers!

From the #1 New York Times bestselling author of The Nightingale and The Great Alone comes an epic novel of love and heroism and hope, set against the backdrop of one of America’s most defining eras—the Great Depression.

Texas, 1934. Millions are out of work and a drought has broken the Great Plains. Farmers are fighting to keep their land and their livelihoods as the crops are failing, the water is drying up, and dust threatens to bury them all. One of the darkest periods of the Great Depression, the Dust Bowl era, has arrived with a vengeance.In this uncertain and dangerous time, Elsa Martinelli—like so many of her neighbors—must make an agonizing choice: fight for the land she loves or go west, to California, in search of a better life. The Four Winds is an indelible portrait of America and the American Dream, as seen through the eyes of one indomitable woman whose courage and sacrifice will come to define a generation.

Kristin Hannah is an award-winning and bestselling author of more than 20 novels including the international blockbuster, The Nightingale, Winter Garden, Night Road, and Firefly Lane. Her novel, The Nightingale, has been published in 43 languages and is currently in movie production at TriStar Pictures, which also optioned her novel, The Great Alone. Kristin is a former-lawyer-turned writer who lives in the Pacific Northwest with her husband.

Christina Dodd is a New York Times bestselling author who builds worlds filled with suspense and adventure, and creates some of the most distinctive characters in fiction today. Her newest novel, The Wrong Alibi: An Alaskan Mystery, was released in December. Her fifty-two novels have been translated into twenty-five languages, featured by the Doubleday Book Club, recorded on Books on Tape for the Blind, and been called the year's best by Library Journal. Dodd herself has been a clue in the Los Angeles Times crossword puzzle!

The Four Winds: A Novel (Hardcover)

The Great Alone: A Novel (Paperback)

The Nightingale: A Novel (Paperback)

Fly Away: A Novel (Paperback)