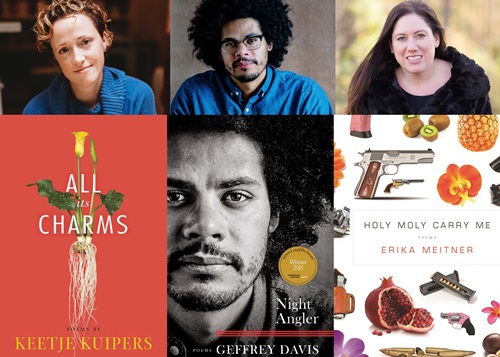 Join us in the Readings Gallery for an awesome line-up of stellar poets!

Keetje Kuipers’ new collection of poems All Its Charms chronicles her decision to become a single-mother-by-choice and her marriage to the only woman she ever loved. These poems contain more than the reinvention of family—they show who we can become when we move past who we thought we’d be.

Geffrey Davis’s award-winning second collection, Night Angler, reads as an evolving love letter and meditation on what it means to raise an American family. In poems of deep gratitude and wonder, Davis delivers a heart-strong prayer for the messy success of breaking through trauma to create new models of fatherhood.

Holy Moly Carry Me takes readers into the heart of Appalachia—its highways and strip malls, its fragility and danger—and wrestles with racial tensions, religious identity, gun violence, raising children, and the anxieties of life in the 21st century. With a refusal to settle for easy answers, Meitner’s poems never stop asking what it means to love our neighbor as ourselves.

Keetje Kuipers is the author of three books of poetry: Beautiful in the Mouth (BOA, 2010), The Keys to the Jail (BOA, 2014), and All Its Charms (BOA, 2019). Her work has been published in over a hundred magazines, included in both The Pushcart Prize and Best American Poetry anthologies, read on NPR’s Writer’s Almanac, and honored with a Wallace Stegner fellowship, Bread Loaf fellowship, and the Margery Davis Boyden Wilderness Writing Residency. Kuipers is faculty at Hugo House and Senior Editor at Poetry Northwest. She lives with her family on an island in the Salish Sea.

Geffrey Davis is the author of Night Angler (BOA Editions, 2019), winner of the James Laughlin Award, and Revising the Storm (BOA Editions, 2014), winner of the A. Poulin, Jr. Poetry Prize. A recipient of fellowships from Bread Loaf, Cave Canem, and the Vermont Studio Center, his work has appeared in Crazyhorse, Mississippi Review, New York Times Magazine, The New Yorker, and Ploughshares. A Pacific Northwest native, Davis teaches with the University of Arkansas and The Rainier Writing Workshop low-residency MFA program. He also serves as poetry editor for Iron Horse Literary Review.

Erika Meitner is the author of five books of poems, including Holy Moly Carry Me (BOA Editions, 2018), Copia (BOA Editions, 2014), and Ideal Cities (HarperCollins, 2010), which was a 2009 National Poetry Series winner. Her poems have appeared in Best American Poetry, The New York Times Magazine, Ploughshares, The New Republic, Virginia Quarterly Review, The Southern Review, Tin House, and elsewhere. Meitner is currently an associate professor of English at Virginia Tech, where she directs the MFA and undergraduate creative writing programs.

Beautiful in the Mouth (A. Poulin #32) (Paperback)

The Keys to the Jail (American Poets Continuum #142) (Paperback)