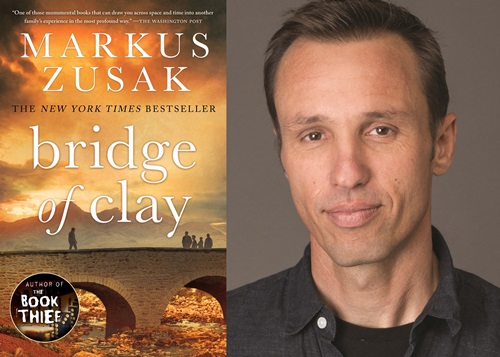 Village Books is thrilled to welcome Markus Zusak to the readings gallery for the trade paperback release of Bridge of Clay, the breathtaking story of five brothers who bring each other up in a world run by their own rules. As the Dunbar boys love and fight and learn to reckon with the adult world, they discover the moving secret behind their father’s disappearance. At the center of the Dunbar family is Clay, a boy who will build a bridge—for his family, for his past, for greatness, for his sins, for a miracle. The question is, how far is Clay willing to go? And how much can he overcome? Written in powerfully inventive language and bursting with heart, Bridge of Clay is signature Zusak.

Markus Zusak is the author of the extraordinary international bestseller The Book Thief and I Am the Messenger, an LA Times Book Award Finalist and Printz Award Honor book. The Book Thief, which has sold 16 million copies worldwide, is published in 42 foreign language territories, and has spent over 500 weeks on the New York Times bestseller list. Originally published in the U.S. in March 2006, the novel received glowing praise and numerous awards, including a Michael L. Printz Honor from the American Library Association and the Sydney Taylor Book Award from the Association of Jewish Libraries. The Book Thief has since gone on to become a book selection of community reads programs across the country and was released as a major motion picture in 2013. It was also featured on the list of America’s 100 most-loved books by PBS’s The Great American Read. Markus lives in Sydney, Australia, with his wife and children.

I Am the Messenger (Paperback)