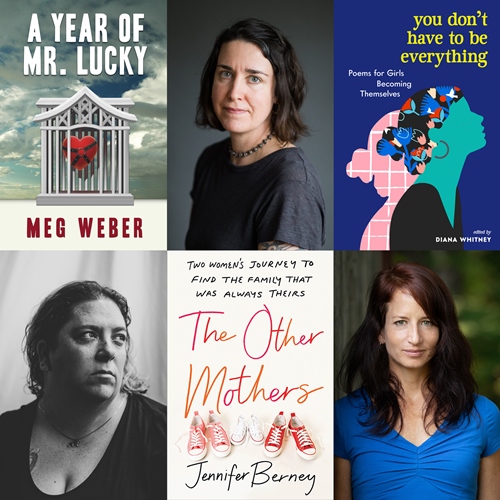 Join us for this great line-up of talented authors!

On A Year of Mr. Lucky: When Meg Weber - a recently divorced, queer, single parent - is ready to date again, she meets Mr. Lucky, a smart dominant with similar interests. But not all goes as planned. This memoir chronicles her journey of erotic encounters, explorations of self-worth, submission, pain, pleasure, and healing.
Meg Weber writes memoir about sex, grief, family, and tangled relationships. Her writing gives voice to the ways her life unfolds outside the boundaries prescribed for her. She is a queer mental health therapist in her hometown of Portland, Oregon where she lives with her teenager and their Labradoodle named Portland. Meg’s writing is featured in MUTHA Magazine, Manifest-Station, Rabble Lit, and HipMama, and in anthologies by Seal Press, Sincyr Publishing, and Pact Press.

The Other Mothers: Two Women's Journey to Find the Family That Was Always Theirs offers an intimate look at what many queer couples go through when they decide to conceive a child. Author Jennifer Berney uses her own experience as a launching point to explore the patriarchal history of the fertility industry, the value of community, and the meaning of family.
Jennifer Berney writes to explore the human state of longing. Her essays have appeared in Longreads, The Offing, Brevity, The New York Times, The Washington Post, and many other publications. She lives in Olympia, Washington with her wife, two children, and many animals.

You Don’t Have to Be Everything is an inclusive, illustrated poetry anthology for teen girls. Voices like Maya Angelou and Margaret Atwood speak candidly of desire, rage, shame, belonging, self-love and identity. The poets give girls permission to embrace the fullness of who they are— and who they are becoming.
Diana Whitney writes across the genres with a focus on feminism, motherhood, and sexuality. Her first book, Wanting It became an indie bestseller and won the Rubery Book Award in poetry. Her writing has appeared in the New York Times, the Washington Post, Glamour, Longreads and many more. An activist in her Vermont hometown and beyond, Diana advocates for survivors of sexual violence and works as an editor and yoga teacher.

A Year Of Mr. Lucky (Paperback)

The Other Mothers: Two Women's Journey to Find the Family That Was Always Theirs (Paperback)

You Don't Have to Be Everything: Poems for Girls Becoming Themselves (Paperback)