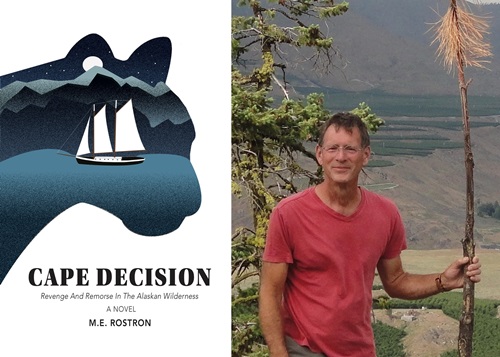 The deep labyrinthine Alaskan fjords do not readily divulge their secrets. In a land where bears outnumber people, the constraints of civilization can disappear and the lines between justice and vengeance blur. When a promising college student, Narshall Stuckrath, is killed in prison while serving time on a drug charge, his family explodes in grief and anger. Two fathers—the one who raised him and the other who sired him—have their own ideas of retribution. But the most majestic rain forest left on earth has seen far worse and does not take sides in the affairs of men—or does it?

Cape Decision is an entirely fictional tale realistically grounded in the geography and recent history of the Alaskan Panhandle. Readers encounter a Fish and Game Officer who is a reluctant investigator of a possible homicide, a Tlingit native who never forgets a favor, a fisherman unhappily in league with smugglers, an impenitent poacher, and an unfortunate mountain lion. The whole is set in the roadless wilderness that is Southeast Alaska—an area with more bears than people—where one can vanish into the frigid fathomless fjords, with only ravens and gulls as witnesses.

Mike Rostron grew up near Eugene, Oregon, and studied anthropology and literature at the University of Oregon, later attending graduate school at Western Washington University. After adventures in Oregon, Washington, Afghanistan, and Alaska Mike married and moved to Southeast Alaska, where he and his wife raised their two girls. After 20 years in Alaska they moved to the far northwestern corner of Washington state, where they still make our home.

Cape Decision: Revenge and Remorse in the Alaskan Wilderness (Paperback)