Night of a Thousand Authors, an Election Coverage Respite 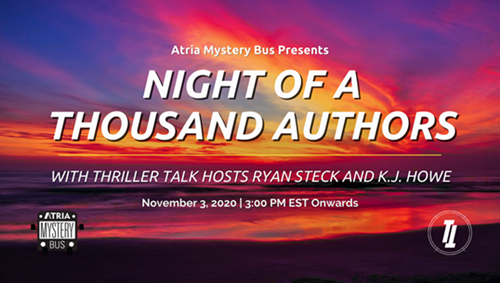 Tuesday is going to be a long day. Take a break from election coverage and relax with talk of murder, mayhem and terror in this marathon event!

David Brown, Deputy Director of Publicity at Atria Books and “driver” of the @AtriaMysteryBus twitter feed, has teamed up with the Executive Director of ITW and ThrillerFest, Kimberley Howe and influential book blogger Ryan “The Real Book Spy” Steck to create NIGHT OF A THOUSAND AUTHORS, election day counterprogramming for mystery, thriller and suspense fans to escape from the stress and anxiety of that day.
Beginning at 12pm PST on Tuesday November 3 and streaming from our Facebook page, NIGHT OF A THOUSAND AUTHORS is being described as “The Jerry Lewis Telethon” meets “Dick Clark’s Rockin’ New Year’s Eve” with the biggest names in crime fiction.

NIGHT OF A THOUSAND AUTHORS is a marathon of 10 minute interviews hosted by Howe and Steck—the “special sauce” is that each author will share the first two minutes of their interview on the screen with the previous guest and the last two minutes of their interview with the next guest. Among the confirmed guests are Janet Evanovich, Brad Thor, Lisa Scottoline, Gregg Hurwitz, Brad Meltzer, Ruth Ware, John Connolly, Kyle Mills, Kathy Reichs, Karin Slaughter, Jennifer Hillier, R.L. Stine, William Kent Krueger and Alafair Burke.