N. K. Jemisin in Conversation with Mikki Kendall, The City We Became 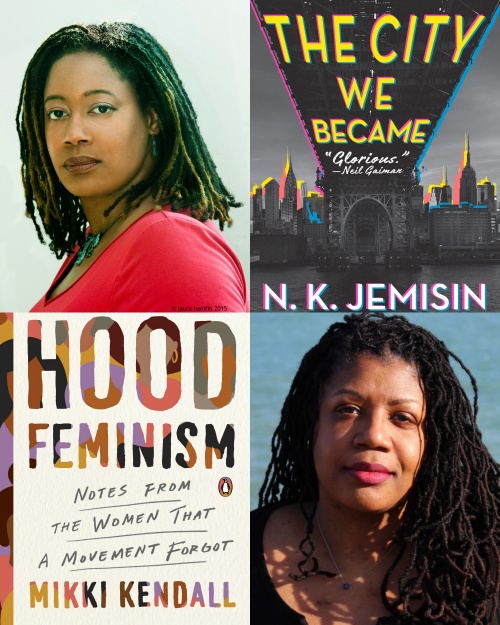 Join us on Crowdcast for a virtual event celebrating the publication of The City We Became in paperback! N.K. Jemisin will be joined by Mikki Kendall, author of Hood Feminism: Notes from the Women that a Movement Forgot. Hosted by Village Books in partnership with Orbit Books and other independent bookstores around the country.

Registration includes a copy of The City We Became AND an autographed bookplate (while supplies last)!

Three-time Hugo Award-winning and New York Times bestselling author N.K. Jemisin crafts her most incredible novel yet, a "glorious" story of culture, identity, magic, and myths in contemporary New York City.In Manhattan, a young grad student gets off the train and realizes he doesn't remember who he is, where he's from, or even his own name. But he can sense the beating heart of the city, see its history, and feel its power.
In the Bronx, a Lenape gallery director discovers strange graffiti scattered throughout the city, so beautiful and powerful it's as if the paint is literally calling to her.
In Brooklyn, a politician and mother finds she can hear the songs of her city, pulsing to the beat of her Louboutin heels.

And they're not the only ones.
Every great city has a soul. Some are ancient as myths, and others are as new and destructive as children. New York? She's got six.

N. K. Jemisin is the first author in history to win three consecutive Best Novel Hugo Awards, all for her Broken Earth trilogy. Her work has also won the Nebula, Locus, and Goodreads Choice Awards. She has been a reviewer for the New York Times Book Review, and an instructor for the Clarion and Clarion West writing workshops. In her spare time, she is a gamer and gardener, and she is also single-handedly responsible for saving the world from King Ozzymandias, her dangerously intelligent ginger cat, and his phenomenally destructive sidekick Magpie.

Mikki Kendall is a New York Times bestselling writer, speaker, and blogger whose work has appeared in The Washington Post, The Boston Globe, The Guardian, TIME, Salon, Ebony, Essence, and elsewhere. An accomplished public speaker, she has discussed race, feminism, violence in Chicago, tech, pop culture, and social media on The Daily Show, MSNBC, NPR, Al Jazeera's The Listening Post, BBC's Women's Hour, and Huffington Post Live, as well as at universities across the country. In 2017, she was awarded Best Food Essay from the Association of Food Journalists for her essay on hot sauce, Jim Crow, and Beyoncé. She is also the author of Hood Feminism: Notes from the Women that a Movement Forgot, and Amazons, Abolitionists, and Activists: A Graphic History of Women's Fight for Their Rights and a co-editor of the Locus-nominated anthology Hidden Youth, as well as a part of the Hugo-nominated team of editors at Fireside Magazine. A veteran, she lives in Chicago with her family.

The City We Became: A Novel (The Great Cities Trilogy #1) (Paperback)

Hood Feminism: Notes from the Women That a Movement Forgot (Paperback)

The Kingdom of Gods (The Inheritance Trilogy #3) (Paperback)