Paula Yoo and Brendan Kiely, From a Whisper to a Rallying Cry and The Other Talk - VIRTUAL EVENT 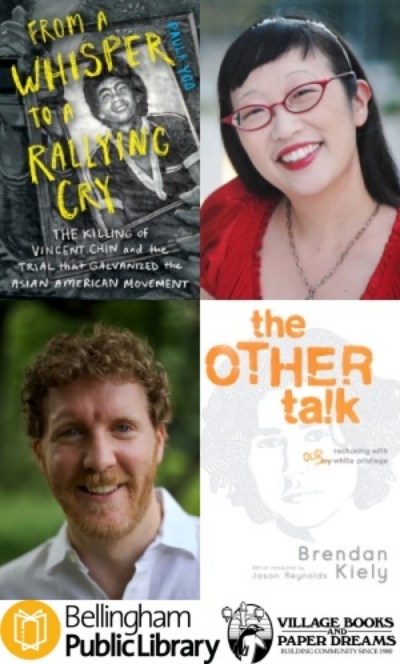 Village Books and the Bellingham Public Library are teaming up to host this special event on zoom. Don't miss an important conversation between two amazing authors in the YA genre.

On From a Whisper to a Rallying Cry: 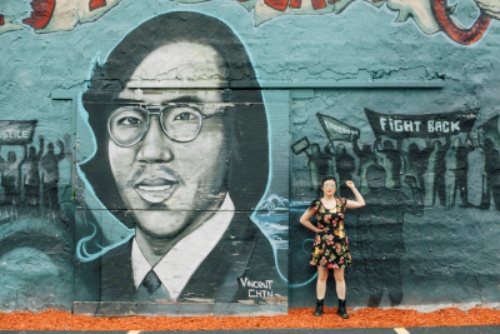 America in 1982: Japanese car companies are on the rise and believed to be putting U.S. autoworkers out of their jobs. Anti–Asian American sentiment simmers, especially in Detroit. A bar fight turns fatal, leaving a Chinese American man, Vincent Chin, beaten to death at the hands of two white men, autoworker Ronald Ebens and his stepson, Michael Nitz.

Paula Yoo has crafted a searing examination of the killing and the trial and verdicts that followed. When Ebens and Nitz pled guilty to manslaughter and received only a $3,000 fine and three years’ probation, the lenient sentence sparked outrage. The protests that followed led to a federal civil rights trial—the first involving a crime against an Asian American—and galvanized what came to be known as the Asian American movement.

Extensively researched from court transcripts, contemporary news accounts, and in-person interviews with key participants, From a Whisper to a Rallying Cry is a suspenseful, nuanced, and authoritative portrait of a pivotal moment in civil rights history, and a man who became a symbol against hatred and racism.

Paula Yoo is an award-winning children’s picture book author and novelist, a prolific TV writer/producer, and a freelance violinist. From a Whisper to a Rallying Cry is her debut YA nonfiction book. She lives in Los Angeles.

On The Other Talk:

Award-winning and New York Times bestselling author Brendan Kiely starts a conversation with white kids about race in this accessible introduction to white privilege and why allyship is so vital.

Talking about racism can be hard, but...

Most kids of color grow up talking about racism. They have “The Talk” with their families—the honest talk about survival in a racist world.

But white kids don’t. They’re barely spoken to about race at all—and that needs to change. Because not talking about racism doesn’t make it go away. Not talking about white privilege doesn’t mean it doesn’t exist.

The Other Talk begins this much-needed conversation for white kids. In an instantly relatable and deeply honest account of his own life, Brendan Kiely offers young readers a way to understand one’s own white privilege and why allyship is so vital, so that we can all start doing our part—today.

“There have been many calls to action; [this] is a mighty, necessary response”

“A clarion call to action, a call to love, to do better for ourselves, our neighbors, and our nation” — Samira Ahmed, New York Times bestselling author of Internment

"This is the book for all the white folks who asked ‘How do I talk to my kids/students about racism?’”— Joanna Ho, New York Times bestselling author of Eyes that Kiss in the Corners

Brendan Kiely is the New York Times bestselling author of All American Boys (with Jason Reynolds), Tradition, The Last True Love Story, and The Gospel of Winter. His work has been published in over a dozen languages, and has received the Coretta Scott King Author Honor Award, the Walter Dean Meyers Award, and ALA’s Top Ten Best Fiction for Young Adults. A former high school teacher, he is now on the faculty of the Solstice MFA Program. He watches too much basketball and reads too many books at the same time, but most importantly, he lives for and loves his wife and son.

Village Books is pleased to bring this event to you in partnership with our friends at the Bellingham Public Library!

From a Whisper to a Rallying Cry: The Killing of Vincent Chin and the Trial that Galvanized the Asian American Movement (Hardcover)

The Other Talk: Reckoning with Our White Privilege (Hardcover)

The Story of Movie Star Anna May Wong (Paperback)

The Gospel of Winter (Paperback)