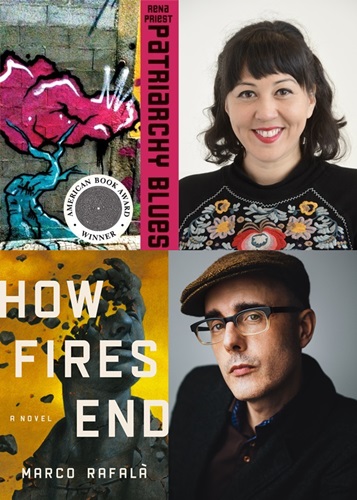 Set in post-World War II Sicily and mid-eighties America, How Fires End chronicles the long legacy of a single act of violence, illustrating along the way the complicated dynamics of familial bonds, the devastating effects of war upon childhoods, and the inextricable nature of personal and political identities. In a sweeping narrative that contains multiple perspectives and grand themes—revenge, love, forgiveness—the novel not only offers a striking portrait of a single family, but also interrogates traditional and troubling definitions of masculinity and the powerful allure of fascism. How Fires End is a story of Sicilian Americans, but it is not a mafia tale. It is a story of World War II, but it is not an account of military conflict. It is, instead, a heartfelt examination of the complex relationship between immigrant parents and their first-generation children.

Marco Rafalà is a first-generation Sicilian American novelist, musician, and writer for award-winning tabletop role-playing games. He earned his MFA in Fiction from The New School and is a cocurator of the Guerrilla Lit Reading Series in New York City. Born in Middletown, Connecticut, he now lives in Brooklyn, New York. His fiction and non-fiction have appeared in the Bellevue Literary Review and LitHub. How Fires End is his debut novel.

On Patriarchy Blues, "Dedicating this collection of poetry to the 'subterranean homesick matriarchy,' Priest juxtaposes safety with risk, fluidity with stability, and the stinging pink of a slapped cheek with someone who’s feeling blue...Pungent observations and skillful use of language abound in Patriarchy Blues.”  -The Book Monger, Barbara Lloyd McMichael

Rena Priest is a Writer, and a member of the Lhaq'temish (Lummi) Nation. As a 2019 Jackstraw Writer, Priest performed at literary events throughout the Salish Sea bioregion. Her debut collection, Patriarchy Blues, was honored with an American Book Award, and her most recent collection Sublime Subliminal, was selected and published as the finalist for the 2018 Floating Bridge Press Chapbook Award. She has attended residencies at Mineral School, Hedgebrook, and Hawthornden Castle International Retreat for Writers. Her work can be found online at Verse Daily, Diagram, Cosmonauts Avenue, Poetry Northwest, and elsewhere. She holds an MFA from Sarah Lawrence College