Ransom Riggs at the SPARK Museum! 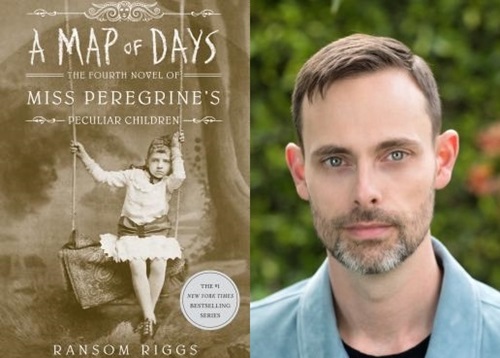 Come join us at the SPARK Museum of Electrical Invention as we transform it into the "Cascadia Loop," circa 1925. If you are a fan of Riggs' bestselling series, you know what we mean and if you don't, aren't you intrigued? Come dressed in your best '20s-era duds to hear Ransom Riggs discuss the latest installment about Miss Peregrines peculiars.

A Map of Days: Having defeated the monstrous threat that nearly destroyed the peculiar world, Jacob Portman is back where his story began, in Florida. Except now Miss Peregrine, Emma, and his peculiar friends are with him, and doing their best to blend in. But carefree days of beach visits and normalling lessons are soon interrupted by a discovery—a subterranean bunker that belonged to Jacob’s grandfather, Abe.

Clues to Abe’s double-life as a peculiar operative start to emerge, secrets long hidden in plain sight. And Jacob begins to learn about the dangerous legacy he has inherited—truths that were part of him long before he walked into Miss Peregrine’s time loop.

Now, the stakes are higher than ever as Jacob and his friends are thrust into the untamed landscape of American peculiardom—a world with few rules—that none of them understand. All new wonders, and dangers, await in this brilliant new chapter for Miss Peregrine’s peculiar children. Their story is again fully illustrated by haunting vintage photographs, but with a striking transformation for this all-new, multi-era American adventure—full color.

Published to wide acclaim in 2011, Miss Peregrine’s Home for Peculiar Children hit number one on the New York Times bestseller list, where it has spent more than 100 weeks. The series has sold over 10 million copies and been translated into over 40 languages. Tim Burton’s “Miss Peregrine’s Home for Peculiar Children” movie for 20th Century Fox landed at #1 in its opening weekend at the box office.

Ransom Riggs is the #1 New York Times bestselling author of the Miss Peregrine’s Peculiar Children novels and its companion, Tales of the Peculiar. Riggs was born on a farm in Maryland and grew up in southern Florida. He studied literature at Kenyon College and film at the University of Southern California. He lives in Los Angeles with his wife, bestselling author Tahereh Mafi, and their family.

Tickets are $5 with a portion of ticket sales going to the SPARK museum. Tickets are available at Village Books and on brownpapertickets.com.

Tales of the Peculiar (Paperback)