Richard Rapport, Seattle's Medic One: How We Don't Die 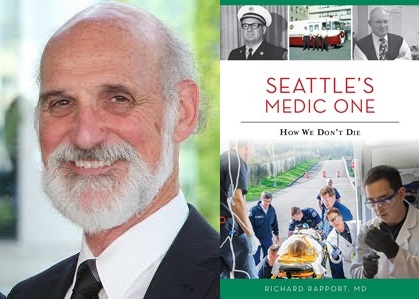 In 1968, Dr. Leonard Cobb, along with Seattle fire chief Gordon Vickery, began to implement something new and daring: one of the country's first pre-hospital coronary care systems. Along with Dr. Michael Copass, they started Medic One, an emergency service unlike any other. One year later, the first vehicle equipped with a defibrillator and ten highly trained Seattle firefighters took to the streets. Medic One has since trained hundreds of paramedics, added an emergency air transport service in four neighboring states, helped build a statewide emergency transfer system and saved countless lives. Dr. Richard Rapport delivers an inside look at one of the most influential medical programs in Washington State and the country.

Richard Rapport is a clinical professor at the University of Washington School of Medicine in both the Department of Neurological Surgery and the Department of Global Health. He is the author of Physician: The Life of Paul Beeson (nominated for the Washington State Book Award) and Nerve Endings: The Discovery of the Synapse (nominated for the Washington State Book Award and the Aventis Prize). He has published dozens of professional papers, as well as essays in journals and literary magazines, including The American Scholar, The Pharos, Poetry, The Northwest Review, Seattle Review, Open Spaces, and The Threepenny Review. Two of these essays were nominated for the Pushcart Prize, and one was noted in Best American Essays. Dr. Rapport is an attending physician at Harborview Medical Center in Seattle, where among other duties he is the co-site director for the UW medical students’ neurosurgical elective course. He is married to the writer Valerie Trueblood.

Seattle's Medic One: How We Don't Die (Paperback)

Nerve Endings: The Discovery of the Synapse (Paperback)