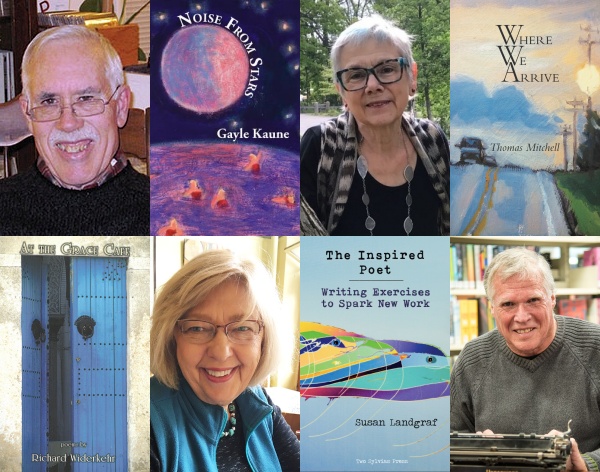 Join us for an afternoon of poetry with this stellar line-up of poets!
CLICK HERE TO ATTEND
Richard Widerkehr’s new book is At The Grace Cafe.  Sheila Nickerson said, "These poems shine with the restorative strength of love." His work has appeared in Rattle, Writer’s Almanac, Verse Daily, Arts & Letters, Atlanta Review, Crab Creek Review, and many others.  He earned his M.A. from Columbia University and won two Hopwood first prizes for poetry at the University of Michigan.  He has taught writing workshops at the Port Townsend Writers Conference, in the Upward Bound Program at Western Washington University and, later, worked as a case manager with the mentally ill.
Gayle Kaune, from Port Townsend, is the author of three books, Still Life In The Physical World (Blue Begonia Press), All The Birds Awake, and Noise From Stars (both from Tebot Bach) She writes poems “blessed by the ordinary.”  Kaune has published widely in magazines such as Poet And Critic, Seattle Review, and Crab Creek Review.  She has won several Washington Poets awards and a Ben Hur Lampman award.  A Licensed Clinical Social Worker, she has taught workshops throughout the northwest, including at the Port Townsend Writers Conference.
Susan Landgraf was awarded an Academy of American Poets Laureate award in 2020. Books include The Inspired Poet, a writing exercise book, from Two Sylvias Press (2019), What We Bury Changes the Ground and Other Voices. More than 400 poems have appeared in Prairie Schooner, Poet Lore, Margie, Nimrod, The Meadow, Calyx, and others. She served as Poet Laureate of Auburn, WA, from 2018-2020.
Thomas Mitchell's newest book, When We Arrive, has just been published by Lost Horse Press. He is author of two previous books of poetry, The Way Summer Ends and Caribou. His poems have appeared in many journals, including the New England Review, New Letters, Miramar, and Valparaiso Poetry Review. Most recently he has been selected as the Featured American Poet in The High Window.
Books:

At the Grace Cafe (Paperback)

What We Bury Changes the Ground (Paperback)

Where We Arrive (Paperback)