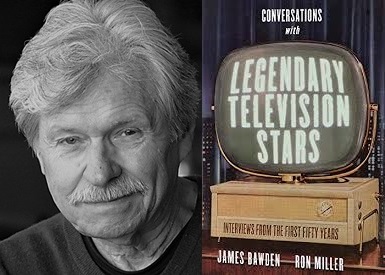 During television’s first 50 years, families would gather around their TV sets nightly to watch shows such as I Love Lucy, Gunsmoke, M*A*S*H, and The Beverly Hillbillies. Many of the stars of these beloved shows have passed away, but their presence remains—not only through their performances, which are still viewed and appreciated today, but also through stories they told in interviews over the years. Seasoned journalists James Bawden and Ron Miller showcase 39 interviews, selected from conversations conducted from 1971 to 1998, that present a fascinating glimpse of important figures from TV’s past. Featured are exclusive interviews with major stars (including Donna Reed, James Garner, and Ricardo Montalban), comedians (including Lucille Ball, George Burns, and Milton Berle), TV hosts (including Dick Clark and Ed Sullivan), and notable musical entertainers (such as Glen Campbell, Mary Martin, and Lawrence Welk). Each chapter explores the subject’s TV work— with detailed behind-the-scenes disclosures—and includes additional information about the subject’s performances in film and on stage.

Ron Miller was a TV editor of the San Jose Mercury News from 1977 to 1999 and a syndicated columnist for the Knight Ridder News Service. A former national president of the Television Critics Association, a recipient of the National Headliner Award, and a veteran instructor at the Academy for Lifelong Learning at Western Washington University, he is coauthor of Conversations with Classic Film Stars: Interviews from Hollywood’s Golden Era and You Ain’t Heard Nothin’ Yet: Interviews with Stars from Hollywood’s Golden Era.

Mystery Classics on Film: The Adaptation of 65 Novels and Stories (Paperback)